Greta Thunberg: The teenage old soul of the climate crisis 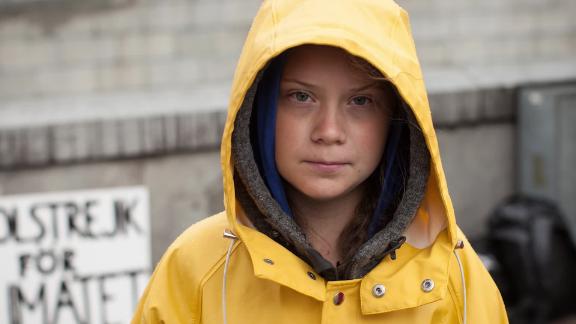 CNN's Bill Weir talks with teen climate activist Greta Thunberg on the challenges and victories in her fight to bring global awareness to climate change.

In person, she is tiny.

Eyes wide and head down, her discomfort with crowds and small talk make it easy to understand why Greta Thunberg says she was "an invisible girl" for most of her 16 years.

But when Thunberg went to Washington -- into the lights, cameras and lack-of-action that makes up the modern congressional hearing -- the smallest and youngest person in the room came off as the oldest soul on Capitol Hill.

Brushing off Republican talking points and Democratic flattery with equal flat annoyance, even friendly softballs were treated as reminders that she takes this much more seriously than most grown-ups. Even those in the House Foreign Affairs Subcommittee on Climate.

"How can we get more kids involved in this issue?" asked Rep. Ben Luján, a Democrat from New Mexico.

"Just tell them the truth," she said. "Tell them how it is. Because when I found out how it actually is, it made me furious."

Her manner is level and unflinching, her voice soft and halting and she admits she may be the most reluctant activist in modern times. Yet in the age of Instagram filters and charismatic influencers, something about her raw honesty around a message of blunt-force fear turned this girl from invisible to global.

"As it is now, people in general don't seem to be very aware of the actual science and how serious this crisis is," she said to the scattered lawmakers and dozens of cameras at the hearing this week. "I think we need to inform them and start treating the crisis like the existential threat it is."

When Thunberg walked into a conference room at the Ford Foundation for interviews, I flashed to a short story I wrote in college about a child who can see the future.

On his popular TV show, the boy announces that all war will end the following day but, as humanity celebrates, he admits to his mother that it was a lie. "Tomorrow, all life on earth will end in fire," he tells her, and "I don't think they can take it."

Convinced that humanity can -- MUST -- take the hardest of truths, Thunberg set down her "Skolstrejk för Klimatet" ("School Strike for Climate") sign, put on a mic and began a gauntlet of interviews about the end of life as we know it.

"I mean, I don't like being the center of attention," she said. "I don't want to be heard all the time, but if there is anything I can do to improve the situation then I think it's a very small price to pay."

It's been less than a year since she plopped down in front of Parliament in Stockholm, a one-girl Swedish version of the American school strikes for gun control.

"The symbolism of the climate strike is that if you adults don't give a damn about my future, I won't either," she explained.

By Day 2, she had company. By Week 2, a viral movement on social media, and within a few months, she stood before dignitaries at the UN's climate change conference in Poland. "You only speak of green eternal economic growth because you are too scared of being unpopular," she said.

A month later, she took a train to Davos, Switzerland, slept in a tent and told the rich and powerful that the house is on fire. "Adults keep saying we owe it to the young people to give them hope. But I don't want your hope. I want you to panic."

Having sworn off flying, it took a 60-foot sailboat on loan from Monaco's royalty to get her to America, and while her selfies amid whitecaps drew new followers by the thousands, it also made her a target of conservative climate crisis skeptics. "Freak yachting accidents do happen in August," tweeted Arron Banks, a founder of the pro-Brexit Leave campaign.

"For me, that is just in a way, funny," Thunberg responded with a smile. "It is like they don't have any arguments left so they, so they have to just mock me, or mock my diagnosis or my appearance. In a way, it is a positive sign that something is happening. They feel threatened by, by this movement. That means we are making a difference."

By "diagnosis," she means Asperger's. Thunberg's mother is a famous singer in Sweden and has written about Greta's place on the spectrum as something like a superpower.

"It makes me work a bit different. I think differently," she said. "My diagnosis has definitely helped me keep this focus. When you are interested about something you just continue to read about it and you get super focused."

Actually reading the dense reports of the Intergovernmental Panel on Climate Change (IPCC) puts her in the minority. But it also fuels a righteous frustration that she even needs to justify her obsession. "It's not because (climate change) is especially interesting," she said, rolling her eyes. "It's a matter of life and death."

In March, almost 1.5 million children in dozens of countries left classrooms and took to the streets. With strikes planned in over 500 places in the US alone today, the Fridays for Future movement could easily double those numbers.

"I think we, we will be seeing lots of social tipping points, because the distance between what people and media companies, politicians are saying, versus what they are doing, the distance between that is increasing. So that just builds up the absurdness of the situation," she said.

"We will try to push it and make sure that the world leaders have all eyes on them so that they cannot continue to ignore this."

Our time is up. David Wallace-Wells is waiting to do the next interview and give her his book "The Uninhabitable Earth." More food for dark thought.

Thunberg hoisted her "Skolstrejk" sign under one arm. The first two cardboard versions of the sign wore out, so this one is plywood, fortified to survive a movement that will last her lifetime.

Woman in hospital after intentionally crashing into ISP car