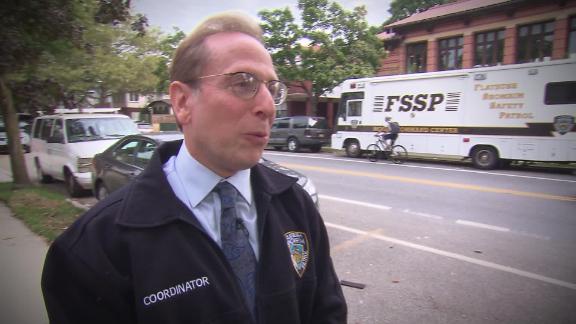 CNN's Jason Carroll looks at the rise of anti-Semitic hate crimes in the US, and how the Orthodox Jewish community is responding.

Police cleared the Jewish community center in Albany, New York, on Sunday after a person affiliated with the center received an emailed bomb threat, authorities said.

Albany police were notified of the email around 11:05 a.m. and responded with officers and three K-9 units, Albany police spokesman Steve Smith said.

With the help of New York State Police, officers cleared the building and determined there was no device or any threat inside the center or the neighboring day care center, Smith said.

The threat was emailed to Jewish community centers across the country, said Rich Azzopardi, a spokesman for New York Gov. Andrew Cuomo. Officials couldn't give details on the locations, he said.

Cuomo tweeted Sunday that "Bomb threats were made by email today against multiple Jewish Community Centers across NY."

The incident is the latest in a growing number of anti-Semitic threats and attacks in New York and around the country. Cuomo said Sunday there have been about 42 anti-Semitic incidents in the state in the past couple of months, CNN affiliate WTEN reported.

Attorney General William Barr last month said the Justice Department will get more involved in fighting such crimes as their number rises.

The FBI has been notified about the Albany incident, and the investigation is ongoing, according to Smith.

Cuomo was at the Albany JCC on Sunday, according to Azzopardi.

The New York Police Department is monitoring the situation in Albany, an NYPD spokesman told CNN on Sunday, saying it is not currently aware of any threats made to any JCCs in the city.