Alyson Stoner returns to 'Ellen DeGeneres' and the spotlight 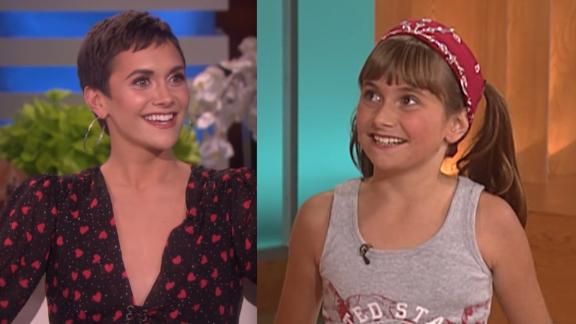 Alyson Stoner, who gained fame as a dancer in a 2002 Missy Elliot video, returned to "The Ellen DeGeneres Show" 17 years after teaching Ellen some of her dance moves on the show.

Alyson Stoner still knows how to "Work It."

The former child star of the Missy Elliott music video of the same name appeared on "The Ellen DeGeneres Show" 17 years after first sitting on that stage.

Now 26, the former Disney Channel actress talked about reuniting with Elliott at the recent MTV Video Music Awards for a surprise appearance as part of the rapper's performance.

"First of all, obviously credit goes to Missy for allowing me to participate and honor her, and kind of recreate that timeless moment," she said.

The actress and dancer was 9 years old when she stole the show with her performance in the 2002 "Work It" music video which lead DeGeneres to have her on the first time.

"Seventeen years ago, our first season, I saw the Missy Elliott video, and I was like, 'There's this little girl in this video that is so good'," DeGeneres said. "And our producers found you, had you on the show, and look at you now. I mean it's amazing."

These days, Stoner said, she is living the simple life and has given away almost all of her worldly possessions to counteract the over-consumption that life in Hollywood can breed.

But DeGeneres felt she needed to have at least one item.

"I know you got rid of your television ... but at least you should watch me," DeGeneres said before gifting Stoner with a 65-inch TV.