About 1,250 lightning strikes recorded in Washington within three hours 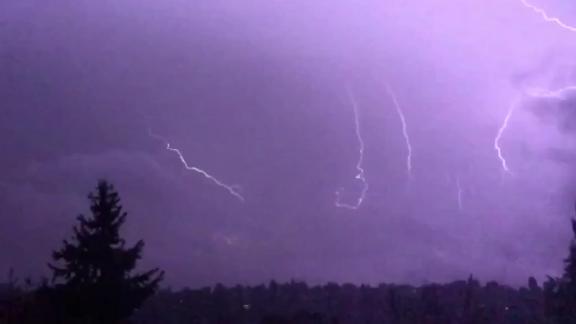 About 1,250 lightning strikes were recorded in western Washington state during a storm that caused widespread power outages, the National Weather Service said.

A strong line of thunderstorms developed over western Washington, bringing frequent lightning, heavy rains, flooding and hail to the Puget Sound region, according to the National Weather Service's office in Seattle.

Lightning occurs when ice particles within a cloud interact with each other through collision, causing the particles to fracture and break apart, according to NASA. The intense heat of the lightning generates a sound called thunder that is transmitted through the air at the speed of sound, it added.

Lightning and thunder happen at the same time but since light travels faster than sound, the flash of lightning is seen sooner than thunder is heard.

"When lightning strikes, a bright flash of light is generated. Light travels at a constant 186,000 miles/second, which means that we see the flash immediately as it happens," NASA said.

At its peak, the lightning storm caused power outages to over 4,500 customers, according to Seattle City Light.

The storm also delayed the football game between University of Washington and UC Berkeley at Husky Stadium. It also caused an early closure of the Washington State Fair in Puyallup.