Hurricane Dorian is lashing the east coast of central Florida 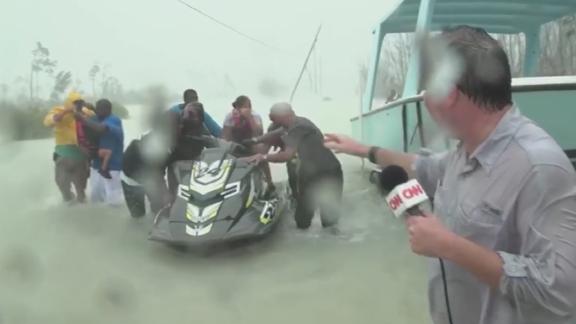 Severe flooding from Hurricane Dorian is hampering rescue efforts in the Bahamas as residents try to help each other in the aftermath of the storm. CNN's Patrick Oppmann reports.

Dorian is on the move again after brutally punishing the northern parts of the Bahamas for more than a day.

The Category 2 storm, with winds of 110 mph, was lashing central Florida's east coast Tuesday night, the National Hurricane Center said. Life-threatening storm surge and dangerous winds are expected along the state's coast as well as along the coasts of Georgia, Florida and the Carolinas, regardless of the hurricane's exact track, the center said.

"The flash flood threat will increase overnight along the Florida east coast, then spread up the southeast and mid Atlantic coast beginning Wednesday," the center said. Coasts of Georgia and the Carolinas are under a moderate risk of flooding Wednesday and Thursday, the center said.

Dorian is moving north after battering the Bahamas. Miles of debris from houses smashed apart by the hurricane stretched Tuesday across the landscape of the Bahamas' Great Abaco Island as the deadly storm left behind a paradise obliterated.

The storm's death toll, which officials fear will rise sharply, stands at seven people, according to Prime Minister Hubert Minnis.

On Great Abaco, high winds remained but the rain had subsided Tuesday as residents emerged to gasp at the incredible devastation. Huge piles of rubble were what remained of businesses and homes wrecked by the strongest storm to hit the islands, aerial video showed.

It's difficult to tell whether one scene shows a neighborhood or an industrial center. The ruin was immense; the area had been turned into what looked from above like a floating landfill. Shipping containers were tossed among the rubble.

Brandon Clement, who was in a helicopter over the island, told CNN that even new homes constructed under more stringent building codes were destroyed by the storm. One older neighborhood is gone, he said.

"You can't tell that there are any homes there. It looks like a bunch of building materials were put in a big grinder and thrown on the ground," he said.

The Prime Minister told reporters after returning from an aerial tour of Great Abaco that he estimated there was damage to 60% of the homes there. According to a 2010 census, 17,224 people lived on the Abacos and there were about 5,200 occupied houses, apartments and townhomes with an additional 2,916 vacant units.

"We have been attacked by a vicious, devastating storm (from which there was no defense)," Minnis told CNN.

Minnis said additional police and security forces will be sent to the Abacos on Wednesday morning to prevent violence or looting.

Fortunately, New Providence Island and the capital of Nassau, which generate much of the Bahamas tourist revenue, had not been touched, the Prime Minister said.

On Grand Bahama Island, residents of Freeport fervently worked to rescue people in communities where the havoc wreaked by Dorian was much worse than expected.

With streets almost impassible due to high water and stranded vehicles and with pounding rain still falling and tropical storm force winds blowing, residents put together an ad hoc rescue group with boats and personal watercraft.

The rescue efforts are dangerous and harrowing, according to a CNN crew that watched rescued Bahamians brought to a bridge half-covered by water that was being used as a staging point.

The CNN crew tried to drive around Grand Bahama Island, but many streets are either flooded or are blocked by submerged cars.

Dozens of people were going back and forth to help with the rescue. Some of the people rescued were utterly exhausted after spending all night clinging to their roofs or being stuck in their attics.

Freeport resident Howard Armstrong described how his wife drowned in front of him after the storm surge from Hurricane Dorian swamped their home, leaving them with only their heads were above the water.

After hours of waiting in the flooded house for rescue, Armstrong's wife succumbed to hypothermia and slipped under the water.

"She was gone so quickly," Armstrong said as he waited for his wife's body to be recovered.

Another man said he found his brother clinging to a tree and the brother's wife was last seen grasping a piece of cardboard.

Dorian inched away from the northern Bahamas after lingering over the islands for days, leaving catastrophic damage and people stranded in flooded buildings.

Since it smashed into the Abaco Islands as a Category 5 storm on Sunday, it knocked homes to the ground and flooded streets in the northern Bahamas.

"Whatever you can send, we'll take it, because we are in trouble," he said.

Freeport resident Harold Williams said his son went out on a Jet Ski and heard people calling out. "Help! Help me, get out!" one said.

Williams said they went to get stranded relatives who had to wade out to the watercraft in chest-deep water.

"I don't think we've seen anything like this in our lifetime. Total destruction," Williams said.

Dorian — the strongest hurricane ever to make landfall in the Bahamas — moved only 30 miles in 30 hours from Monday into Tuesday, mercilessly raking the same areas with destructive storm surge and winds.

At 10 p.m. ET Tuesday, Dorian was heading slowly to the northwest at 6 mph. By the time the storm moves away, parts of the Bahamas will have received more than 30 inches of rain, forecasters said.

The storm could make a US landfall on Thursday or Friday in North or South Carolina, CNN meteorologist Judson Jones said.

People are trapped on their roofs, lawmaker says

Lewis, the Bahamian lawmaker, told CNN that when he toured parts of Freeport on Tuesday morning, he saw a couple houses that had lost their roofs.

"People standing outside, just stunned," he said. "But we have more water damage than wind damage right now. And even persons on high ground that need to be rescued, they're trapped on their roofs, in the attic space, and we cannot get to them."

Rescuers have sometimes had to postpone their missions because fallen trees and other debris block their way, Bahamian Sen. Kwasi Thompson told ZNS, a national broadcaster.

On Monday, Lewis captured video showing Freeport's main airport mostly underwater — a virtual lake lapping up against the windows of the building Lewis was standing in.

Dorian kills at least 7 in the Abaco Islands

Dorian killed at least five people from the Abaco Islands, officials said. Two of those people died after being transported to a hospital on Grand Bahama.

McIntosh's 31-year-old daughter found the boy's body, she told the Bahamas' Eyewitness News. She says her granddaughter is also missing.

Bahamian officials said Monday it was still difficult to assess the number of casualties amid the dire conditions.