Beyoncé reveals weight when she started her Coachella diet 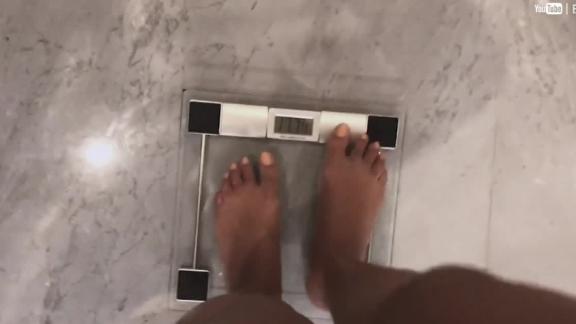 Beyoncé underwent a strict diet and exercise regimen to lose the weight she gained while pregnant with her twins.

Even Beyoncé isn't a fan of the scale.

The singer released a video Wednesday on YouTube sharing how she got back in shape for Coachella after the birth of twins Rumi and Sir in 2017.

It's part of her partnership with Marco Borges, exercise physiologist and founder of 22 Days Nutrition, a plant-based diet.

Beyoncé had been set to headline the Coachella Valley Music and Arts Festival two years ago but had to delay it until 2018 because of her pregnancy.

In the new video, a post-birth Bey is about to embark on a grueling schedule.

Viewers of her Netflix concert documentary "Homecoming" know that the 5 foot, 7 inch superstar was 218 pounds when she gave birth and followed a strict diet to get the weight off.

"In order for me to meet my goal, I'm limiting myself to no bread, no carbs, no sugar, no dairy, no meat, no fish, no alcohol," Beyoncé says in the documentary.

The new video includes scenes of Borges coaching the performer and some of her Coachella team.

"You guys have super-long schedules. I know what that's like," he tells them. "You need the energy to be able to move around, to travel."

Not everyone is a fan of the video or its message.

"Y'all know I love Beyonce. Perhaps a little too much," Canadian TV host Joelle Tomlinson tweeted. "But, I'm disappointed to hear her calling her weight post-twins every 'woman's nightmare', and promoting a VERY restrictive diet. Perhaps use your star power to promote body positivity and beauty at any body size. #IMHO."

Beyoncé and her husband. Jay-Z, partnered with Borges' The Greenprint Project, which encourages plant-based diets to help the environment.

The couple wrote the foreword to his book and had a contest offering the chance to win free tickets to their shows for life for fans willing to become more plant-based.

"We are not about promoting any one way of living your life," they wrote. "You decide what's best for you. What we are encouraging is for everyone to incorporate more plant-based meals into their everyday lives."