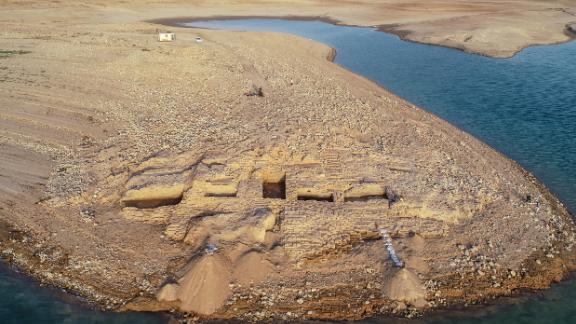 A 3,400-year-old palace was discovered in the Kurdistan region of Iraq after the Mosul Dam reservoir water levels dropped due to drought.

A 3,400-year-old palace has emerged from a reservoir in the Kurdistan region of Iraq after water levels dropped because of drought.

The discovery of the ruins in the Mosul Dam reservoir on the banks of the Tigris River inspired a spontaneous archeological dig that will improve understanding of the Mittani Empire, one of the least-researched empires of the Ancient Near East, the Kurdish-German team of researchers said in a press release.

"The find is one of the most important archaeological discoveries in the region in recent decades," Kurdish archeologist Hasan Ahmed Qasim said in a press release.

The palace would have originally stood just 65 feet from the river on an elevated terrace. A terrace wall of mud bricks was later added to stabilize the building, adding to to the imposing architecture.

Ivana Puljiz, an archeologist from the University of Tübingen's Institute for Ancient Near Eastern Studies, describes the palace, known as Kemune, as a carefully designed building with mud-brick walls up to two meters (6.6 feet) thick.

Some of the walls are more than two meters high, and various rooms have plastered walls, she added.

The team also found wall paintings in shades of red and blue, which were probably a common feature of palaces at the time but have rarely been found preserved.

"Discovering wall paintings in Kemune is an archaeological sensation," she said in a press release.

"Kemune is only the second site in the region where wall paintings of the Mittani period have been discovered," Puljiz told CNN in an email.

Ten clay tablets covered in cuneiform, an ancient system of writing, were also discovered. High-resolution photos of the texts have been sent to Germany for translation.

"From the texts we hope to gain information on the inner structure of the Mittani empire, its economic organisation, and the relationship of the Mittani capital with the administrative centers in the neighboring regions," Puljiz told CNN.

Archeologists first became aware of the site in 2010 when water levels in the reservoir were low, but this is the first time they have been able to excavate.

However, the site was submerged shortly after the dig, Puljiz said, adding: "It is unclear when it will emerge again."

Qasim also worked on another project with the University of Tübingen, uncovering a Bronze Age city in northern Iraq in 2016.

The team unearthed the city, which lies beneath what is now the small village of Bassetki in the autonomous region of Kurdistan, close to territory that was held by ISIS.

Days after the dig was completed, Iraqi security forces began their push to take Mosul back from ISIS.

Measuring a kilometer in length and 500 meters across (about 1,000 yards by roughly 550 yards), the ancient urban area features grand houses, a palace, an extensive road network and a cemetery.

An earlier version of this story incorrectly stated where and how the text on the clay tablets would be analyzed.