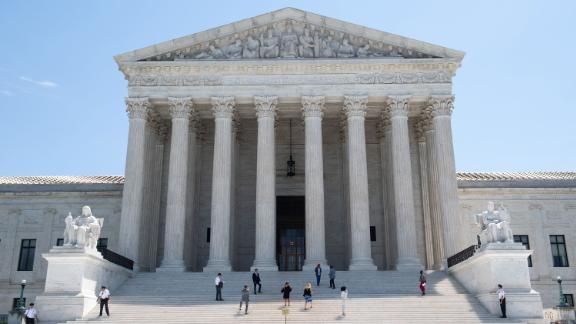 The Supreme Court said that federal courts must stay out of disputes over when politicians go too far in drawing district lines for partisan gain — a ruling that could fundamentally affect the balance of power in state legislatures and Congress.

If you are one of the majority of Americans who believe that hyperpartisanship and polarization is hurting our country, the Supreme Court just guaranteed that our political divisions and dysfunction will get much worse. And they did it on a party-line 5-4 vote.

It's hard to overstate the impact of Thursday's ruling that allows state legislatures to draw district lines to maximize their own political advantage. It slams the door on any federal judicial backstop to rampant partisan self-interest at the expense of fair and representative elections. The downstream effect will be red states that are more red and blue states that are more blue -- almost irrespective of how the people actually vote.

It enshrines the idea that politicians can choose their people rather than people choosing their politicians. And it will lead inevitably, consistent with partisan self-interest, to fewer competitive general elections, pushing political power at the congressional and state legislative level further toward the extremes -- and those bodies usually are the breeding ground for our senators, governors and presidents. Washington's inability to reason together to solve common problems is a result of this rot, and it's about to get far worse. Ultimately, it could compound a crisis of confidence in our democracy.

Chief Justice John Roberts has often sincerely said how much he dreads the idea that the courts will be seen as a partisan and political branch of government. But that is what is happening under his watch, and it will be worse because of this decision.

To be sure, the chief justice was careful to say that "excessive partisanship in districting leads to results that reasonably seem unjust." That's because it is.

Take a look at the results of the rigged system of redistricting that drove the two cases the justices considered. In North Carolina, a congressional map that was explicitly drawn to give maximum partisan advantage to Republicans resulted in GOP congressional candidates winning 53% of the popular vote but being awarded 77% of the congressional seats: 10, to just three for the Democrats.

But it's not just Republicans who do this. The other case was in Maryland, where a Democratic governor freely admitted that he redrew the congressional maps after the last census to essentially erase what had been a Republican congressional seat. The district flipped from a 28-point Republican win in 2010 to a 21-point Democratic margin in 2012. Again, this was by design. And Republicans in the state are left with minimal congressional representation, which further increases alienation from our political system.

Make no mistake, this rapacious partisan behavior is what the Supreme Court has just empowered with no realistic checks and balances on partisan self-interest. It codifies the idea that political might makes right. And it will further divide and balkanize our democracy as politicians try to hold on to power almost regardless of the will of the people.

At the very least, the chief justice's decision for the majority was naïve. At worst, it was cynical. Because the idea that partisan politicians will police themselves when it comes to colluding to create the maximum number of safe seats -- where even indicted politicians are likely to win re-election, as we saw in the cases of Reps. Duncan Hunter and Chris Collins -- is absurd. They will get away with whatever they can. And the Supreme Court just blessed their mess.

The chief justice expressed faith in the fact that redistricting reforms are going forward on a state-by-state basis. But his faith belies the obvious fact that those reform efforts are almost always the result of ballot initiatives, in which concerned citizens have bypassed the state legislatures out of necessity. And even that's not always enough. In Missouri, voters approved a nonpartisan redistricting reform initiative in 2018, and afterward, Republican Gov. Mike Parson led an effort to repeal it, saying that the issue was too complicated for "the standard person" to grasp.

It's a story we see over and over: Incumbents don't want redistricting reform -- it makes their re-elections less assured -- but the people often do. That's why Roberts' remedy makes no sense: It violates the political equivalent of the old legal truism that no one should judge their own case.

But here we are. And if some Republicans are celebrating their partisan court victory, they will be singing a different tune when and if their states fall under Democratic control before a census and the subsequent drawing of new congressional districts. Then, it will be too late. There will be more single-party states, which is a recipe for corruption and contempt for the fairness of the democratic process at precisely the same time that geopolitical adversaries are pushing alternative systems that disdain liberal democracy.

The Supreme Court just did harm to our democracy and the cause of free and fair elections. The only remedy left will be for more citizens' efforts in states that have ballot initiatives. The backstop of the federal courts imposing sanity with an eye toward something larger than political self-interest has been removed.

Likewise, the Founding Fathers' remedy of constitutional amendment has been rendered all but impossible by the polarization and hyperpartisanship afflicting our system. Barring the creation of a mass political movement to impose reform on an increasingly extreme rigged partisan system, the door has been closed to what most close political observers believe is the most comprehensive way to heal our democracy.

So when Roberts writes in his decision that "the fact that such gerrymandering is 'incompatible with democratic principles' ... does not mean that the solution lies with the federal judiciary," he is proactively allowing the proliferation of practices that he admits are often "incompatible with democratic principles." It is a dereliction of duty at the worst possible time in our democracy.

Its impacts are not academic; they will result in a more bitterly divided nation that is increasingly susceptible to extreme voices on the right and left and politicians who will feel newly emboldened to put special interests ahead of the national interest without the check of the vast majority of voters or the courts. As Professor Richard Bensel warned in the New York Times, "Democracy doesn't work with that kind of polarization."

We will look back on this decision as one of the very worst by the Supreme Court in the modern era, and we will be working to clean up this mess for a very long time to come. But we can feel a sense of mission that might outweigh frustration by recognizing that this is the very situation that George Washington warned us about, when he wrote in his farewell address, "However [political parties] may now and then answer popular ends, they are likely in the course of time and things, to become potent engines, by which cunning, ambitious, and unprincipled men will be enabled to subvert the power of the people and to usurp for themselves the reins of government, destroying afterwards the very engines which have lifted them to unjust dominion."

TLSC students head back to class