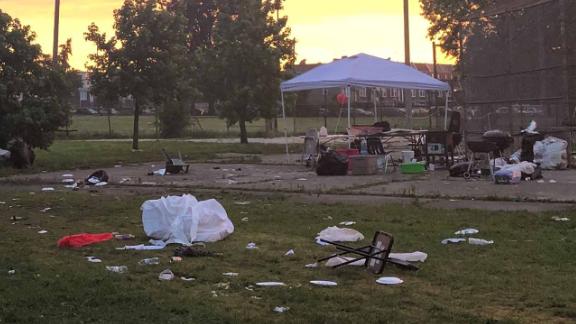 Police are searching for a gunman who opened fire at a graduation party in Philadelphia. One person was killed and five others were injured in the shooting, according to Philadelphia Police Commissioner Richard Ross.

Police are searching for a gunman who opened fire at a graduation party in Philadelphia Sunday night.

One person was killed and seven others were injured in the shooting, according to Philadelphia Police Commissioner Richard Ross.

Around 60 people were at the party when shots rang out, Ross said.

Ross said that four of the victims were teens between the age of 15 to 17 who suffered gunshot wounds to their legs.

An adult victim died of their injuries while three other adult victims in their twenties suffered various wounds to different parts of their bodies, Ross said.

Hours after the shooting, the crime scene looked like a trashed party with garbage strewn about, chairs overturned and several party items left behind in a field.

There was no crime scene tape and it looked as though the party-goers had just gotten up and left instead of fleeing from gunfire.

Ross says it's not clear how many shooters were involved and a motive for the shooting is not yet known.

A Texas demolition company accidentally tore down the wrong house