Transgender bodybuilder wants to lift up his community 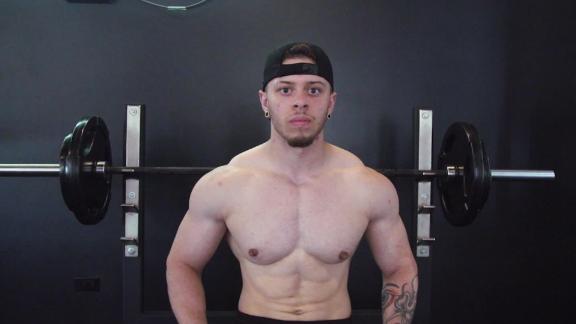 Ajay Holbrook was assigned the female sex at birth. At 17, he began transitioning and sculpting his body to his true self.

As a kid growing up in Texas, Ajay Holbrook's video-game avatars always had a similar look -- a bearded dude with tattoos and bulging muscles.

"It's crazy, because the characters I created literally look like who I am today."

But as a kid, coming to grips with that true identity was a struggle.

Around the age of 5, when kids are usually focused on kindergarten, Holbrook's mind was filled with more complex thoughts, such as, "Why don't I feel like a girl?"

That child with the muscular avatar was assigned a female sex at birth. He remembers sadly looking in the mirror bandaging and taping up his breasts to try and hide them, cutting off his long hair against his mother's wishes and crying, praying to wake up as boy.

"I always saw myself as a male figure. I was always into sports instead of girly stuff. I would get my dad to buy me boys' clothes so I could match my brother."

"Tomboy" was a word that Holbrook heard a lot growing up near Sugar Land, but that seemed to only add to his confusion. He eventually came out as a lesbian to his mother but knew there was something more to what he was feeling. "It was way past just tomboy stuff."

It wasn't until he discovered the word "transgender" at 13 years old that his struggle began to make more sense.

"It resonated with me so much. I didn't know there was something for these feelings. Feelings that have been eating me alive. That day I knew who I was."

At 17 years old, after six months of gender therapy, Holbrook began taking testosterone and beginning the physical transition to match who he has always felt he has been - Ajay.

The decision, however, didn't come easy to his parents. His father wasn't in the picture much and while his mom eventually learned to accept her son, his stepdad was not as accepting.

"He didn't know I was trans at first and our relationship quickly soured. He was completely unaccepting. Then, one day he lost his cool and beat the absolute crap out of me."

This was only three months into his transition, so Holbrook still had the frame and build of his younger self.

"I was 97 pounds, literally no muscles. I felt completely defenseless, scared."

It became a moment where he would turn weakness into strength.

"I came to the conclusion that getting stronger would protect me from any of that ever [happening] again. It was enough motivation to get me serious about bodybuilding."

Holbrook, now living in Los Angeles, started hitting the gym. And hitting it hard. After being dissatisfied with his body most of his life, he was now ready to sculpt himself toward his idea of the perfect male physique.

Inside the gym, he moves quickly between the bench press, bicep curls and a chest fly machine. He works out at least six days a week for an hour or two at a time.

"My body wasn't the way I wanted it before. With bodybuilding, I'm able to work and improve myself every day."

Now 22, Holbrook has bulked up to 150 pounds and lifts around 325-350 lbs on most compound exercises. Besides working on himself, he's also a personal trainer. But his main career goal right now is establishing himself in the bodybuilding world.

"I want to compete in the Mr. Olympia contest and make a footprint for trans people."

It's a lofty goal, but just one of the many challenges he's facing while trying to lift past the stereotypes of transgender people.

"Discrimination is real in the bodybuilding community. I've gotten a lot of inappropriate questions, ugly stares in the locker room. I've had people tell me that I'll never be a real man. There is a lot of misunderstanding. I just try to remember my path."

And for Holbrook, it comes down to one thing -- equality.

"People in the trans community, we just want to navigate life normally like everyone else. That's literally it."

Looking in the mirror now, Holbrook sees the version of himself that he used to only see in his video games. No longer sadden by his own reflection, when he looks back in the mirror now, he says only one word comes to mind -- "thankful."