Fewer guns mean fewer killings, and we all know it 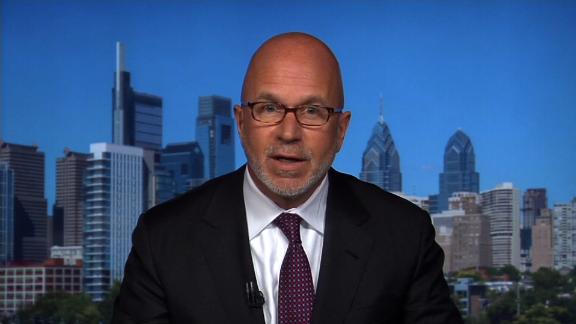 CNN's Michael Smerconish discusses gun violence in the US after the Virginia Beach shooting that killed at least 12 people.

The latest mass shooting in the United States has claimed the lives of 12 people, 11 of whom were city employees in Virginia Beach. The shooter, a longtime engineer for the city, also died. He used semi-automatic handguns with a sound suppressor and extended magazines to carry out his attack before he was killed in an ensuing shootout with the police. Additional weapons were found at the shooter's home, although authorities did not specify what they were.

For the victims' families and loved ones, this is a tragedy. But this shooting isn't just a random catastrophe, and no pro-gun politicians get to call it one unless they also recognize their role in enabling it.

While public figures will undoubtedly continue to relay their thoughts and prayers, this is the reality: shootings where a great many people are slaughtered are now normal in the United States. This will continue until we all agree to stricter gun laws and fewer guns. Until then, all those who fight against sensible gun legislation have no business simply expressing their sympathies. They offer just words, which at this point are beyond meaningless.

It really is simple: Stricter gun laws and fewer guns mean fewer gun deaths. They mean fewer mass shootings. The United States is an outlier among peaceful, developed nations in our tremendous number of mass shootings. This is because we are an outlier among peaceful, developed nations in the number of guns we have -- which is exacerbated by the ease of getting them and the lax rules regulating them.

That's it. And any moderately sensible person of any political disposition knows it. They know it even though funding for research on gun violence has been stifled for decades (you can thank the gun industry for that one).

Guns are the cause of a majority of homicides in the United States. Yes, people who want to kill can find other ways, but those other ways often require a lot more effort.

Again, any sensible person knows this.

How else, other than with a gun, can one easily kill a dozen people in just a few minutes? It's difficult and risky to build a bomb, and you can't buy one at your local Wal-Mart. And a knife attack is much easier to stop; mass stabbings have certainly occurred, but they do not claim anywhere near the number lives that guns do in the US.

And then there's the great toll of suicide by gun. According to the CDC, the majority of deaths from guns in 2016 were suicides. One study found that most people who survived a suicide attempt did not deliberate over their decisions for very long -- 71% said they thought about it for less than an hour; 24% said their deliberations lasted less than five minutes. If a gun is readily available, a hasty decision could more likely be made permanent.

And while pro-gun advocates often tout the importance of self-protection, studies show that bringing a gun into the home puts everyone at a greater risk.

Plenty of people like guns. Guns can be fun to shoot. A lot of people hunt for sport. A relatively small number of gun owners need their guns to, say, defend livestock from predators. But most gun owners do not need their guns. Many say they need to self-protect. But stricter gun control laws would mean fewer "bad guys with guns" to protect oneself from. We would all be safer.

The NRA and other "gun rights" proponents claim that if guns are restricted, only outlaws and bad guys will have guns. But if it were harder to buy guns, they would also stay out of the hands of irresponsible men and women, whose negligent treatment of their weapons results in a great number of deaths and injuries every year, many of which involve children. Many criminals, too, aren't the plotting masterminds we imagine them to be. A tougher road to gun ownership would mean that impetuous gun crimes, or crimes of passion, would simply be less likely to happen.

We, as a country, face a choice. Every gun owner and gun proponent faces a choice. We can allow easy access to guns and the fun they bring, and let people enjoy the sense of power and control and masculinity guns offer. In exchange for that pat emotional comfort, thousands upon thousands of Americans will continue to die unnecessarily. Or we can agree that the only way to prevent gun violence and gun deaths is to regulate guns; sacrificing the illusion that a gun equals freedom is probably worth it.

The question of what sensible gun legislation looks like is one that politicians still need to hash out. But first, we need everyone at the table. Today's Republican Party won't take a seat, because too many are deeply in the pocket of the craven gun industry. The gun industry and the NRA know that their product is the problem, which is why they push for special legal protections. They would be ashamed if they had any shame.

Another 12 innocent people have been gunned down. Don't just nod along as politicians issue their thoughts and prayers. They have the power to take action. The only question that matters is, will they?