Nancy Pelosi is making a big mistake on impeachment 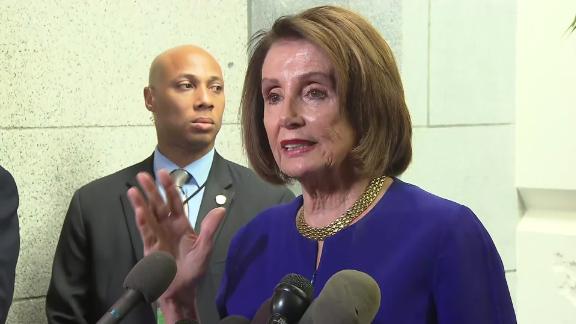 House Speaker Nancy Pelosi called her meeting with the Democratic Caucus about impeachment a "respectful sharing of ideas," and believes that President Donald Trump has "engaged in a cover-up."

House Speaker Nancy Pelosi is sitting on a political powder keg. With a President trying to goad her into launching impeachment, fulfilling the textbook definition of abusing power, she faces growing pressure from her caucus to let the House vote on starting the process. On Wednesday Democrats met behind closed doors once again to discuss the situation.

Like most Democrats, Pelosi understands that someone has to stop President Donald Trump from continuing to wield his authority this way.

The problem is that few in Washington feel bold enough to do anything about him. His critics are hoping that the 2020 election takes care of the problem for them.

This moment is part of a long story. Partisan interests keep triumphing over what is best for our democracy. We have seen this play out for several decades now. Political polarization continues to erode the strength of our government institutions. Massive policy problems such as climate change have been left largely unaddressed. Political careers have been decimated in partisan warfare. Trust in government continues to plummet.

Those cumulative partisan forces have now rendered Congress paralyzed when facing a President who rejects any sense of restraint to how he can use his authority. In addition to the findings in special counsel Robert Mueller's report and the multiple other investigations that are underway, Trump has done much of his dirty business right in front of our eyes. Unlike President Richard Nixon, Trump is so brazen he doesn't feel the need to hide in the shadows.

Over the past few weeks, he and his Cabinet have put on a first-class demonstration in how to subvert the congressional right to oversight. The administration has offered justifications for ignoring subpoenas and preventing testimony that wouldn't pass muster in an episode of "The Simpsons."

When Republicans controlled the House, their response to this kind of abuse was to ignore it and attack the investigators. Speaker Paul Ryan's apparent calculation was that it was more important to protect the interests of the party by keeping Trump in place and insulating him from oversight than it was to hold him accountable.

With conservative judicial picks flowing through the Senate and big corporate tax cuts coming their way, Republicans were in no mood to rock the boat. Even with the President's low approval rating, this course seemed like the best bet. In the end, it is unclear whether their calculation worked. The party did retain control of the Senate but suffered a devastating defeat in the House. Many voters, even in purple districts, voted to check Trump. Still, most Republican leaders continue to stand by the President. The #nevertrump movement is officially dead (with the lonely exception of Rep. Justin Amash).

Now Democrats are the ones with power in the House, and they watch as the President's behavior only gets worse. As more Democrats call on Pelosi to start the impeachment process, she is still pushing back, fearing that the fallout will cost Democrats the House majority and help Trump win re-election while dividing the country even more. Their memory of the late 1990s, when the public turned against the House Republicans for impeaching President Bill Clinton, looms large even if the comparison is faulty.

House Democratic leaders are also leery about moving forward with the impeachment process because they believe Senate Republicans who control the upper chamber will never vote to indict the President. The Democrats would take all the political risks that come from the impeachment process and likely watch the Senate Republicans exonerate the President. Why suffer the political costs, they say, if the outcome is already cooked against them?

Following Wednesday's meeting, the speaker gave no indication that the party would be taking any sort of bold action.

In other words, in their own way, Democratic leaders are now putting partisan interests ahead of what is obviously a crisis for the democracy. Even the speaker and other party leaders have been very direct about the situation. "Every day gives grounds for impeachment," Pelosi said last week. And on Wednesday, she said, "We believe that the President is involved in a cover-up."

The notion that support for an impeachment process is being driven by left-wing Democrats is ridiculous. In fact that's just a talking point from the President's supporters that has made its way into the mainstream media.

Amash, who is a libertarian Republican, and George Conway, a conservative constitutional lawyer, have offered some of the most powerful and reasoned arguments as to why an impeachment process must begin. Trump, Conway wrote in The Washington Post, is a "cancer on the presidency."

House Democrats should not give Senate Republicans an effective check on holding the President accountable.

If the Democrats voted for articles of impeachment, that in itself would be a huge blow to the historical legacy of this President and permanent part of the record with both parties being forced to say where they stand on his use of power. Even if Senate Republicans decided to keep the President in power, that vote would be an extremely important statement for the country. It would be a public statement about what is right and what is wrong.

Although it is impossible to predict how things will play out politically, it is far from clear that having the House vote on articles of impeachment would help the President. Even if Democrats want to play the partisan game, one can imagine that taking such action would energize the Democratic base, sway moderates to the idea that continuing with this presidency for two terms is unacceptable and do more than anything else to define how voters see this President.

Trump's base is energized all the time anyway, so it is unclear an impeachment process would affect their turnout in the 2020 election. The President's national approval ratings are still miserable, and the charges that he faces are far more serious than anything Clinton confronted.

In any case, it is clear that Democrats are more concerned about their partisan prospects in 2020 rather than about making sure that our constitutional checks and balances are working to restrain Trump right now.