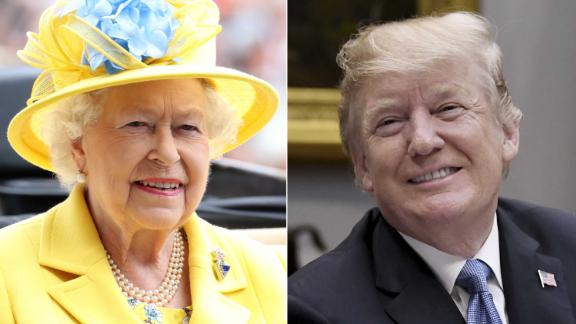 Things haven't been going terribly well in the UK of late.

So you'd think that the state visit this summer of US President Donald Trump -- and all the pomp and ceremony that comes with it -- should give the UK something to look forward to.

Nearly three years since the shock result of the Brexit referendum, the UK is still bitterly divided over its future. Everyone is sick and tired of the argument about what comes next, but no single preference has sufficient support to win that argument. The Brits might know a thing or two about a war of attrition, but this is getting ridiculous.

The country is divided beyond Brexit, too.

Years of Conservative austerity have led to the once-dead socialism of the past dominating the policy of the UK's main opposition party. The union between the four nations is looking shaky, as the differing priorities of England, Wales, Scotland and Northern Ireland are dragged into the spotlight. And protests are becoming common: be they climate activists taking over large parts of central London or far-right groups protesting the arrest of their hero Tommy Robinson.

So, given how unsettled everything is, a state visit from our closest ally, the President of the United States of America, should be something everyone can get behind, right?

Wrong. Donald Trump is not a popular man over here. His UK visit in 2018 drew over 250,000 protestors to the streets of London and other cities. The stand-out moment from that visit was the Trump Baby Blimp, which really is exactly what it sounds like.

That wasn't a state visit, meaning it came without all the trimmings of a formal occasion. Usually, heads of state can expect to be greeted publicly by the Queen, flanked by soldiers mounted on horses, brass bands and all other manners of British lunacy.

For Trump-hating Brits, the sight of their Queen rolling out the red carpet for a man they would rather the UK had nothing to do with will leave a nasty taste in the mouth.

The protests will be angrier and bigger. It's not just a handful of political activists that dislike Trump. Prominent, high-profile politicians and celebrities find the President a deeply distasteful individual.

John Bercow, the Speaker of the House of Commons, was applauded far and wide when he said that in his personal opinion, the President has not earned the right to address the UK's lawmakers in the Houses of Parliament, owing to his travel ban.

Trump has apparently held onto this grudge and has attacked Khan on Twitter more than once. Indeed, the President felt it appropriate in 2017, as London was reeling from a terror attack that ultimately left eight people dead, to have a cheap shot at the Mayor by quoting him out of context on Twitter.

The mocking of Trump even goes as far as the Twitter account of Harry Potter creator, J.K. Rowling, who has a catalogue of biting insults to pick from, though probably none better than saying he was worse than Lord Voldemort back in 2015.

And while the argument that the UK has welcomed heads of state with far more problematic legacies than Trump is a valid one -- Chinese President Xi Jinping, King Abdullah of Saudi Arabia, Romanian dictator Nicolae Ceausescu and the recently-deposed former Prime Minister of Zimbabwe Robert Mugabe, spring to mind -- there is something about Trump that seems to get the UK's back up like few other leaders.

So, when Trump appears in London on June 3, expect huge crowds. And while the Brit's love of complaining might make you think that this could be cathartic, it really couldn't come at a worse time.

Days before Trump's visit, the UK will have been forced to take part in European elections. This was never supposed to happen, but because the UK's lawmakers have to date found it impossible to reach a compromise on a way to Brexit, the UK is still a member state and must participate.

The European elections, while not a huge political event, will be nasty and bitterly-fought over a single issue: the Brexit impasse.

On the same day that Trump's state visit was announced, the newly-formed Brexit Party and its leader Nigel Farage held a press conference, at which candidates talked of the betrayal of democracy. People across the divide are angry about the Brexit mess and the political atmosphere in this country is volatile. If you thought the 2016 referendum was nasty, get ready for round two.

Into all of this walks Donald Trump, a man not known for his sensitivity. His track record includes: retweeting Islamophobic videos from members of a British far-right group; incorrectly saying that UK hospitals were "as bad as a military war zone hospital"; and on the eve of his previous visit to the UK, undermining the British government's Brexit position at a crucial time.

There is speculation in the UK that the timing of the visit is deliberate, to provide distraction from the European election results, at which both main parties are expecting a pummeling. But it's hard to see how parading a man so widely-loathed will temper any British public anger.

So, Mr. President: prepare yourself for big crowds, bigger protests and, probably the biggest Baby Blimp you've ever seen.