The real power of 'pulling a Beyonce' 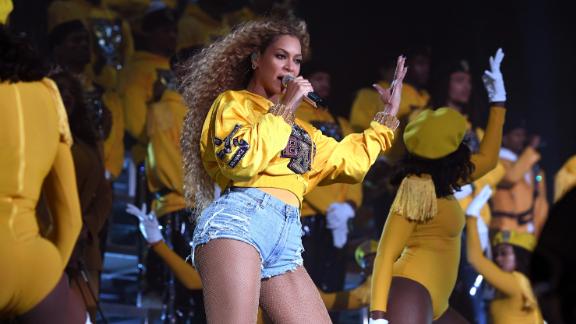 One of the very few things that's certain about any Beyoncé announcement is that nothing is really certain. This was true of last week's reveal that Beychella -- the nickname fans have given to the megastar's history-making 2018 Coachella set -- would be coming to Netflix. There was, almost immediately, speculation about whether the documentary, "Homecoming: A Film by Beyoncé," which premiers today and charts "the emotional road from creative concept to cultural movement," would be a sort of prelude to something else: a new single, a new album, another world tour.

The question, in other words, was whether Beyoncé, who is no ordinary giver of gifts, would, well, "pull a Beyoncé." Since her eponymous, out-of-the-blue 2013 album, pop culture has latched onto this phrase to describe, and show fealty to, the aura of surprise and mystery that has come to mark so many of the pop star's releases. Or as Urban Dictionary has it: "suddenly [releasing] a work to the public without any leaks, warnings, or promotion." "Homecoming," in its own way, fits with this definition: Beyoncé unveiled an unannounced, 40-track live album along with the documentary.

But what are audiences really talking about when they talk about pulling a Beyoncé? I'd argue that the notion has much more substance than it's typically given credit for. That's because it isn't merely about dropping a new piece of work, sans warning, as so many headlines over the years have suggested: "Everybody 'Pulling a Beyoncé' Has Given Me Surprise-Album Fatigue"; "Drake Pulled a Beyoncé and Dropped an Album out of Nowhere"; "Is Beyoncé About to Pull a Beyoncé and Drop a Surprise Album?" Rather, it's about unexpectedly, radically redefining the artist, and even the industry, in a way that forces mainstream tastes to catch up with that artist; that presents pop culture with new, more inclusive modes of creative expression.

Take what's become the primordial example: 2013's Beyoncé. On the one hand, the album's overnight release accomplished that coveted pop-cultural feat: It broke the internet. The album's importance extends beyond that, though. Crucially, it's a visual album. Via its gorgeously shot music videos, Beyoncé keenly explores what it means to be a woman, with a richness and visibility that's almost always withheld from black women in mainstream pop culture.

Think of the thick braggadocio of "Blow" ("Can you eat my Skittles? / It's the sweetest in the middle / Pink is the flavor / Solve the riddle," Beyoncé coos over the funky beat, while gliding on skates at a roller rink), or the vulnerability of "Jealous," the clip for which features Beyoncé wandering the streets as she reflects, ruefully, "And I know that I'm being hateful, but that ain't nothin' / That ain't nothin' / I'm just jealous / I'm just human." But she isn't just another human. She's a wildly famous human who managed to steathily film more than a dozen videos that celebrate herself and black womanhood, a celebration made more potent by the absence of an invitation. She, by her own admission, changed the game with that digital drop.

The digital drop is only the beginning of pulling a Beyoncé, though. In 2018, with no prior proclamation, she and her husband Jay-Z released "Everything Is Love," a nine-track joint record that arguably serves as the final album of the music trilogy that centers on the couple's buzzy marriage (following 2016's "Lemonade" and 2017's "4:44"). The album sees them reclaim their former "'03 Bonnie and Clyde" persona: cavalier, slick, fully aware of their own power. In particular, the music video for "Apeshit" -- directed by Ricky Saiz, who also helmed the video direction for "Yoncé" -- continues Beyoncé's penchant for forward-thinking art.

In it, Bey, Jay, and their cast of black men and women have co-opted the Louvre Museum in Paris. The six-minute video is dusted with images of melanin-rich people doing everything from gyrating to picking their hair -- all juxtaposed with famous works that largely reflect a white, European-elitist history. Here, the music icons proffer a new history -- one that, as it stitches together past and present, pulls blackness from the fringes in a way rarely seen in the culture at large. (In her analysis of the video, The New Yorker's Doreen St. Felix aptly wrote that "the Carters are their own protagonists in their own narrative of establishing a black élite.")

Which brings me back to Beychella's spirit of bombshell reinvention, bracingly captured in "Homecoming." While it was known that Beyoncé would headline the festival in 2018, after she had to postpone the previous year, it wasn't exactly clear what her set would be like, or whether she'd be able to best her previous performances. But she did, of course, infiltrating what has historically been a predominantly white space and, for some two hours, giving a master class in black sound and sentiment. There was, for one thing, the marching band, whose members were drawn from historically black colleges and universities. There was, too, the singer's embrace of black sisterhood through her own fictional sorority. As Beyoncé describes the performance in the new documentary, "Creating something that will live beyond me, something that will make people feel open and like they're watching magic ... That's what I want."

And that's exactly where so much of the power of "Homecoming" -- both the documentary and the surprise live album -- lies. More than merely flipping the script without having given any prior indication of how she'd do so, Beyoncé is writing herself -- her culture -- into the historical record. (There's something ineffably moving about the album's fade from "Lift Every Voice and Sing" -- a.k.a. the black national anthem -- to the ode to black power "Formation.") Beyoncé, in all that, is ambitious, personal yet political, and insurgent.

There's a reason that claims of pulling a Beyoncé usually feel ersatz at best in the hands of someone who is not Beyoncé: Other artists, with their surprise drops, don't necessarily move themselves or their art forward, or re-conceptualize norms. For Beyoncé, meanwhile, the element of surprise is only one ingredient in her radical brew of artistic expansion. Or put it like this: She's a Martian, they wishin' they equal.