How Maxine Waters stood up to Steven Mnuchin 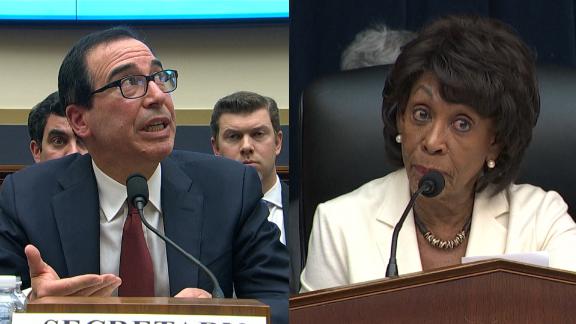 For anyone not versed in the term -- though few women have been fortunate enough to not experience it themselves -- mansplaining is when a man tries to explain something to a woman, the "slower species," in a condescending or patronizing way.

But it's one thing for a woman to experience it in a meeting at work or at a party with some boorish guy spelling things out. It's quite another to have it demonstrated so ably on national television by an official in an administration that is rapidly shedding women in high positions, and to see it satisfyingly slapped down by a woman -- another highly-placed government official, in this case.

In this, Maxine Waters did women (and men), young and old, a favor by publicly identifying what was happening -- and modeling how to respond.

Here's how it went down: Mnuchin was appearing before the committee to discuss his plans for responding to Democrats' requests for President Donald Trump's tax returns. Mnuchin wanted to leave at 5:15 to get to another meeting on his schedule. Waters would not relent; she urged him to stay until 5:30, so that the full committee could question him.

After a tense exchange, with Mnuchin checking his watch, appearing to be gathering his papers to leave, he said, "If you'd wish to keep me here so I don't have my important meeting, and continue to grill me, then we can do that. I will cancel my meeting and I will not be back here."

She took him up on it; he appeared stunned. "You made me an offer. I accepted," said Waters. "I did not make you an offer; let's be clear," Mnuchin huffed. "You're instructing me, you're ordering me to stay here." She told him he was free to leave when he wanted.

Instead of appealing to her in a reasonable, mature, respectful way, however, he chose the sarcastic, arrogant, belittling route of a bully -- and a mansplainer -- offering her detailed instructions on how to end the meeting, as if she were a child and did not understand the problem here.

"Please dismiss everybody," Mnuchin told Waters, his impatience and irritation evident. And then, raising his arm and miming banging a gavel, "I believe you are supposed to take the gravel [sic] and bang it." (Please note that in treating Waters as if she were too unintelligent to know how to end her own hearing, or even to operate a gavel, he misnamed the instrument she would use to end it, calling it a "gravel.")

Although a new-ish term, described in 2008 by author Rebecca Solnit in a piece entitled "Men Explain Things to Me; Facts Didn't Get in Their Way," mansplaining is certainly not a new phenomenon. Men have been explaining things to women for years. As more and more women come to positions of power equal to those of men, however, it's being called out more and more.

Perhaps as cover for this infantilizing of women, men sometimes portray it as the kind of all-in-good-fun "ball-busting" they engage each other with. In this reading, women are supposed to stop being so sensitive and just take it, just like the guys would. That's of course nonsense.

And it wasn't the case here. The response to Mnuchin's arrogance -- his public pillorying when the video started to get around online -- was fully warranted.

He was rude and entitled. As many have pointed out on social media, it's unlikely that he would have responded in such a way if Waters were a white man, or any man. Meanwhile, it's likely that if roles had been reversed -- had Waters or any female politician interacted with a man in such a manner, whether or not he was in charge, she'd have been hung out to dry.

It's possible that Mnuchin, who has become known for his arrogance, would have responded the same way to a male colleague refusing to give him his way -- particularly a Democrat asking tough questions about his boss. (Waters' response to his gavel instructions, by the way: "Please do not instruct me as to how I am to conduct this committee.")

Politicians come to verbal blows all the time, our current commander in chief having set the tone for a heightened state of anti-etiquette. (As one recent piece put it, "we live in an age of rude politicians.") Either way, Tuesday's head-to-head conflict hopefully offers some proof to our current leaders that bully tactics exposed to the light of day generally backfire -- and that mansplaining doesn't work.