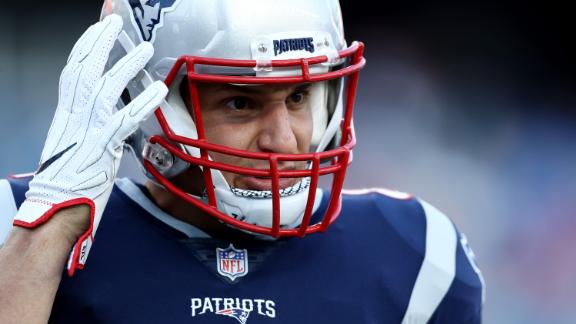 New England Patriots' tight end Rob "Gronk" Gronkowski has announced his retirement from the NFL on his Instagram page.

New England Patriots tight end Rob Gronkowski announced his retirement from professional football on Sunday after nearly a decade in the NFL.

"It all started at 20 years old on stage at the NFL draft when my dream came true, and now here I am about to turn 30 in a few months with a decision I feel is the biggest of my life so far. I will be retiring from the game of football today," Gronkowski posted on Instagram.

"Thank you to all of Pats Nation around the world for the incredible support since I have been a part of this 1st class organization. Thank you for everyone accepting who I am and the dedication I have put into my work to be the best player I could be. But now it's time to move forward and move forward with a big smile knowing that the New England Patriots Organization, Pats Nation, and all my fans will be truly a big part of my heart for rest of my life," the post said.

Gronkowski, who played at the University of Arizona, was drafted in the second round in 2010. He won three Super Bowls as a member of the Patriots and was a four-time All-Pro.

Patriots quarterback Tom Brady called it an honor and privilege to play with Gronkowski in a post on Instragram.

The post read: "You accomplished so much and our team was almost unbeatable when you were on the field! Your fun-loving, inspiring, and positive energy made an impact on everybody you came into contact with!"