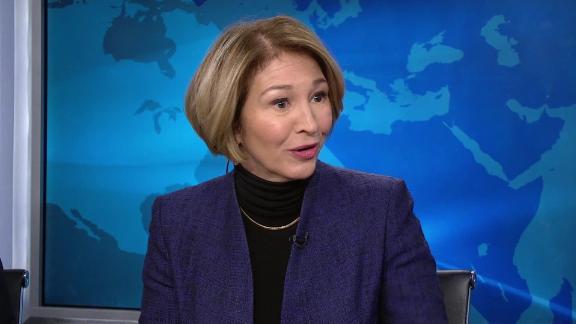 On GPS, Anne-Marie Slaughter describes what it's like to watch Britain "essentially commit suicide as a power." Will it strengthen or weaken the EU?

UK Prime Minister Theresa May will be hoping the third time's the charm when she tries to get the House of Commons to back her Brexit deal this week after two previous defeats -- but she'll need more than just luck to get lawmakers to change their minds.

The question being posed in Downing Street this week is: What will it take for more than 70 lawmakers to back her and get her deal over the line? And does that plea bargain include the Prime Minister promising to step aside within weeks in return for more votes from her own Conservative side?

This suggestion is gaining ground in Westminster. On BBC radio yesterday, former Cabinet minister Esther McVey called on May to announce a "dignified departure" from No. 10 and to make way for a new Prime Minister whom, she argued, would be more enthusiastic about the UK making a clean break from the European Union. This view is shared by an increasing number of Conservative MPs (members of Parliament).

McVey resigned from May's Cabinet last autumn in the wake of the Prime Minister agreeing her deal with Brussels. McVey says that withdrawal agreement is still a "bad deal" but that she has decided to vote for it when it returns to the Commons for a third time because she fears that otherwise Brexit may not happen at all.

McVey isn't the only Tory lawmaker who has switched sides and is planning to back the deal in the Commons. Several MPs have announced that they've changed their minds in recent days. Their number is not yet at 75 -- the figure May needs for victory -- but it is a significant start.

Ministers spent the weekend in talks with the Northern Irish Democratic Union Party (DUP), whose 10 MPs have so far opposed the deal, to try to persuade them to change their minds. May's government could even offer financial incentives in return for votes. It is thought that if the 10 DUP lawmakers switch sides, many Tories will follow.

Prospect of a lengthy delay

Yet there is a possibility tomorrow's vote will be pulled if those crucial 75 votes do not materialize -- because a third defeat could kill off the chances of it being put to the vote for a fourth time.

Instead, the PM could postpone the vote until next week, after she has attended this week's European Council summit in Brussels -- potentially her last as Britain's leader.

If this happens, the European Union is likely to propose a long extension to Brexit -- beyond the expected short delay until June -- and require the UK to take part in the upcoming European elections in May.

If the vote does take place this Tuesday, the outcome will decide the length of that delay.

Under the terms approved by the House of Commons last week, if May wins, she can go to the summit in Brussels to request a short technical extension to Brexit beyond March 29 - delaying departure until June 30 at the latest. This request needs to be approved by the EU's remaining 27 member states, although it is unlikely there will be any opposition.

If the EU rejects this request, Britain will leave without a deal on March 29.

If May loses the vote on her deal for a third time tomorrow, she will go to Brussels and ask for a much longer extension to UK's departure, beyond June 30 and potentially up to two years. Again, this will need to be approved by EU leaders.

If they reject her request, the UK will leave without a deal on March 29.

If this scenario goes ahead, Britain takes part in the European elections, and makes plans for renegotiating the withdrawal agreement. At this point, UK lawmakers have been promised parliamentary time to reach consensus on a new Brexit deal.

But the prospect of a lengthy delay is causing alarm among pro-Brexit Tory MPs, who fear a two-year extension could turn into no Brexit at all. It is this risk that is making many of them change their minds and go for what they see as the comparatively safer option: voting for May's deal this week, no matter how badly they view it.

There is even a possibility that if she loses this week then the Prime Minister, with just a handful of days left before a potential no deal on March 29, could put her deal to the Commons for a fourth time next week with a new ultimatum: back the deal or face a two year delay to Brexit.

In these circumstances, the PM may not need to promise to stand down -- she could finally win support for her deal by threatening Brexiteer lawmakers with losing the thing they want most of all: Brexit itself.