What college cheating scandal says about us 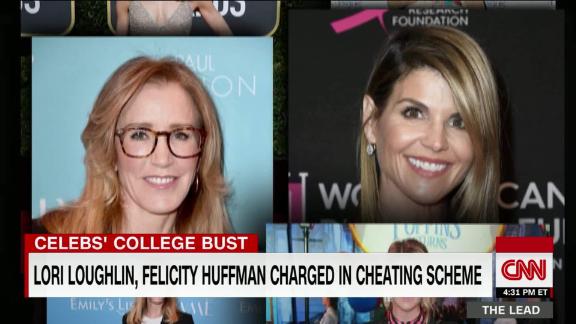 In a case that reveals the dark side of our hypercompetitive, brand-driven approach to higher education, the criminal charges just unsealed in Boston, code named by the FBI as "Operation Varsity Blues," allege wealthy parents bribed test administrators, college coaches and possibly college administrators in return for admitting students into prestigious colleges like Yale, Stanford and the University of Southern California.

CNN has reached out to multiple defendants for comment but has not yet heard back.

Yale, Stanford, Wake Forest, UCLA, USC, the University of Texas and Georgetown have released statements, largely presenting themselves as victims of the alleged criminal schemes, and in some cases announcing internal investigations, a suspension (at Wake Forest) and firings (at USC and Stanford).

William Rick Singer, the man who owned and operated the company at the center of the alleged scheme, has pleaded guilty to multiple charges and through his attorney said Tuesday he was "very remorseful." Former Stanford rowing coach John Vandemoer pleaded guilty to racketeering conspiracy on Tuesday as well.

These charges and the associated investigations will in the coming days surely say much about collegiate athletics, mechanisms of privilege, parental extremes and the overall value of a college education. But right now, what does the existence of such a scandal say about all of us?

In my legal practice, I represent many college students who have been accused of academic misconduct, including instances in which foreign students are accused of having fabricated transcripts and even diplomas to gain admission to US universities. In some cases, I have learned that predatory admissions "agencies" in other countries charged large sums of money to students and their families in return for helping prepare applications that the prospective student plays little role in reviewing.

In my naivete, I believed such conduct to be limited primarily to other countries, but as the charges revealed Tuesday morning, that belief appears to be utterly unfounded. Wealthy and successful Americans -- lawyers like Gordon Caplan, co-chair of the law firm Willkie Farr & Gallagher, and Hollywood actors like Lori Loughlin and Felicity Huffman -- allegedly committed acts that spotlight how hollow the ideology of meritocracy in American higher education is.

In my representation of college students as well as in my adjunct teaching, I have long recognized signs of the enormous and increasing stress the admissions process, parents and college itself places upon students.

The competitive atmosphere can manifest itself in profound anxiety even in middle-schoolers and certainly high-schoolers under pressure to take burdensome AP and honors courses while also seeking to build a "resume" of extracurricular accomplishments. Such pressures can lead to mistakes -- many unintentional and some intentional -- as students cut corners in completing assignments, papers and tests in an effort to not only keep up with workloads but also keep up with social and parental expectations.

Until this scandal broke, I had not realized to what extent such pressure could promote or help parents rationalize outright corruption of some of the most cherished ideals of merit-based fairness in college admissions.

But that is exactly what these criminal charges reveal. The allegations include bribing of test-center administrators to allow reasonable accommodations to students -- such as taking longer to complete standardized tests -- when such students were not genuinely entitled to accommodations under the Americans with Disabilities Act. Other allegations include bribes given to categorize students as scholar-athletes when the students' athletic accomplishments and records may have been fabricated.

Such deeply abhorrent actions, if proven true, injure the many thousands of incredible students who strive and thrive in the face of their genuine need for accommodations. It also insults the heroic efforts of student athletes, including those with accommodations, who carry full academic loads in addition to spending hours after school and on weekends training and competing.

The criminal charges in this case involve bribery by means of wire and mail fraud as well as theft of honest services. The theft of honest services charge resonates particularly ironically here as the actions of these administrators, coaches and parents not only cheated other deserving students and their families but deprived the students of their own "honest services." While some of these children may or may not have been complicit, all of them were children and under the influence of their parents and the adults who allegedly participated in these corrupt schemes. If the charges against their parents are proven, their own integrity is forever impugned.

As a society and nation, we must not give in to the temptation to excuse these parents as simply misguided in their attempts to seek the best futures for their children. For their corrupt attitudes are found to some extent in all of us. The very fact that such actions may have been perpetrated in concert among parents, test administrators, coaches, and perhaps university administrators reflects a fundamental problem in our society. Such a "winning trumps everything" attitude creates a hollowness of true character in our children and perpetuates a values system founded upon the false idols of privilege and elitism.

Wabash Township Firefighter: 'With my termination being seemingly inevitable, I am coming forth now'