Tucker Carlson's words reveal who he really is 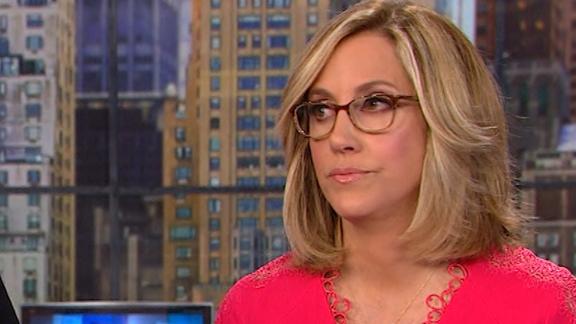 CNN anchor Alisyn Camerota discusses her time at Fox News and Sharia law segments on the network that weren't "fact based."

It is not breaking news that Tucker Carlson has a sexism problem. This is the guy, after all, who has blamed working women for the struggles of men -- namely drug abuse and high incarceration rates. Unable to argue with a female writer on the merits of her arguments, he condescendingly told her that she should "stick to the thigh-high boots." He claims that "something ominous is happening to men in America." The cause of all of these "ominous things?" Women enjoying an increasing share of resources and opportunities.

Now, Carlson's misogyny has gone viral, after Media Matters uncovered audio of Carlson downplaying child rape if it happens within the context of marriage, describing women as "extremely primitive," and referring to a series of female public figures, including Paris Hilton, Britney Spears and Martha Stewart's daughter Alexis as "white whores," "c***y," ugly and pigs. He aired these more extreme views when calling into the radio show "Bubba the Love Sponge" between 2006 and 2011. (If there was ever evidence that white men enjoy vast unearned privileges in American society, it is the fact that there is a grown man who has nicknamed himself "Bubba the Love Sponge" and is nonetheless taken even somewhat seriously.)

Instead of apologizing for these comments made years ago, Carlson doubled down after they came to light, shrugging them off as merely "naughty" and telling critics to watch his show. It is simply "naughty," apparently, to say that an adult man who forces a child into marriage -- and, in Carlson's own telling, rapes her -- isn't as bad as a rapist who nabs a child off the street, because the marital rapist "has made a lifelong commitment to live and take care of the person, so it is a little different." Even Bubba the Love Sponge's co-host deemed that view "twisted" and "demented."

Just as disturbing was a conversation about Carlson's own 14-year-old daughter who, at the time of the recording, was away at boarding school. Bubba the Love Sponge suggested she may be sexually experimenting with her roommate and that "these little girls start experimenting around, next thing you know, you know, you got a lesbian on your hands." Instead of doing what any halfway decent and halfway normal father would do -- tell Bubba he's a repulsive pervert and hang up the phone -- Carlson joined in, saying that while he thinks it's unlikely his daughter is experimenting with other girls, "If it weren't my daughter I would love that scenario."

There's much more in the Media Matters story, and, they say, more to come. In the meantime, Carlson's supporters have derided this report as a "hit piece" (despite it simply being Carlson's own words) or suggested that because these comments are a decade old, they're no longer relevant.

But Carlson's old comments are reflected in his much more recent ones. And his show specifically, and network generally, has repeatedly used accusations of racism, sexism and religious bigotry as cudgels against progressives, while refusing to clean up their own ranks.

For many liberals, opposition to racism, sexism and bigotry is a deeply-held value; it animates our politics and shapes our priorities. That's why many on the left have called for the resignation of Ralph Northam and Justin Fairfax. It's why we are critical of comments that feed into anti-Semitic stereotypes, even when they come from people we like and respect, and why we are similarly critical of Islamophobia. It's why even beloved liberal figures like Al Franken were pushed to step down. These are our ideals. They matter.

These are not the right's ideals, however, which is why you see Republicans running an accused child predator for office, writing off accusations of sexual assault when they're made against one of their own, and continuing to support an unrepentantly racist President. Over at Fox, anchors pretend to care about bigotry, dedicating hours and hours to Ilhan Omar's comments about AIPAC and Ralph Northam's blackface yearbook photo, while their own anchors spout much worse.

Jeanine Pirro suggested that Omar's hijab means she may adhere to sharia over the Constitution; Fox issued a weak condemnation but thus far has enacted no actual penalties, and Pirro also hasn't apologized (she was just asking questions, she said). Will Tucker Carlson see his words damage his standing at the network? It seems unlikely -- especially since he's long been using his platform at the network to peddle similarly woman-hating garbage without consequence.

It's unlikely that Fox will do the right thing with Carlson, Pirro, or their other anchors for whom racist and sexist fearmongering is practically an art form (and certainly a ratings bonanza). But the rest of us can see them for what they are: not a news channel but a propaganda network catering to a largely hateful audience. We can turn them off. Commentators can simply refuse to take the Fox bait, and ignore them like the childish, hateful hypocrites they are.

And going forward, we can refuse to tolerate the kind of misogyny lite that Carlson pushed on Fox. It shouldn't have taken these absurd and extreme comments to identify his profound antipathy to women's equality -- it was there, out in the open, all along. When we see it again -- and we see sexism every day on Fox, and from the Republican Party -- we can call it what it is and understand that even more extreme and hateful views lurk below the surface.