SE Cupp: How I felt watching Trump hug our flag 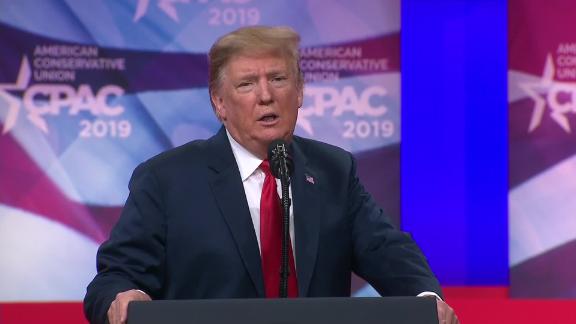 It would have been a jarring image no matter the president.

We're used to seeing the American flag handled in a number of ways. It can be hoisted, saluted, folded in honor of the fallen, even burned in protest.

But it's not every day you see the leader of the free world hug the flag in front of a crowd of adoring followers.

Enter President Donald Trump on Saturday at the annual gathering of conservatives known as the Conservative Political Action Conference (CPAC). He grabbed an unassuming Old Glory by its stand like a prom date, and gave it a brief, slightly terrifying, slow-dance to "Proud to be an American."

In that moment, in a way, the flag was so many of us -- Americans recoiling at the smothering and unwanted advances of an unstable lech. On behalf of the flag, I wanted to shout: "I beg your pardon, sir! Get your hands off of me!"

But as off-putting as Trump's grabbing of the stars and stripes felt to many, it was clearly a consensual act to his supporters, who loved every minute of it and the 122 that followed.

The rambling, unedited and lurching two-plus-hour performance at CPAC was more a series of disconnected blurts than a speech. From musing on the history of tariff policy in the US to praising Rep. Mark Meadows' wife to extolling the benefits of TiVo, Trump did what he arguably does best: He put on a show for a crowd that worships him.

He whacked all their favorite enemies: the press, Democrats, the Mueller investigation, Republicans who would go against him. Many conference attendees called it one of his best performances.

But Trump's "best" performances are almost always at the nation's expense. They are "best" because they are memorably divisive, unfiltered, often profane and seething with animus for enemies perceived and real. And they are all about love for him.

Manhandling the American flag was a perfect representation of this dichotomy. Half the country likely saw it as a fitting metaphor for his presidency writ large: an assault on our most cherished values. He took what was not his, robbed it of all its virtue -- and then presumably moved on to his next conquest.

But to the rest, those who support Trump, it was the quintessential way of showing his unapologetic patriotism. It was honest and earnest. It wasn't fancy or philosophical. It wasn't intellectual or complicated. Hugging the flag is nothing if not literal. It was the way Trump approached his entire presidency, much to their great satisfaction.

The wide chasm separating these two interpretations of the flag moment is also illustrative of another great divide. It's not between left and right -- there are actually a number of crossover issues right now that have found strange bedfellows among Democrats and Republicans, criminal justice reform being just one.

The divide is between Trump supporters and Trump opponents. That may sound obvious in an era when some are allegedly punching each other out. But the interpretations of all things Trump are so divergent, so disparate from one another, that there isn't even a common language set to describe what each is seeing.

This plays out most vividly on social media, where Trump opposition and support are marshaled and weaponized to absurdist degrees. An opinion is voiced, and a hoard of barbarians immediately descend to deem it insufficiently extreme. An anti-Trump comment is almost always denounced not only by Trump supporters but by Trump opponents who don't think it went far enough, encompassed enough targets, condemned enough people. And vice versa for a pro-Trump comment.

There's no room for saying this piece was rotten, but the whole is healthy. There's no gray area, no nuance, no fine lines, no "let's meet in the middle." I've fallen into this trap myself, demeaning some Trump supporters as "Trumpkins."

These insane purity tests of loyalty and disloyalty to a single person, albeit the President, and the urge to cast entire categories of people as pariahs are all to Trump's advantage and not to ours. In making his presidency a referendum on fealty to him, he has sown a toxic and corrosive division in the country that makes even the simplest of images -- hugging a flag, for instance -- impossible to interpret.

The same will go for his presidency. Americans will have vastly different views of what these years meant for the country. The long view of history usually reaches some consensus version of what happened, but there might never be one for Trump's tenure. Was it an assault on the nation? Or its greatest love affair?

Hi: 81° Lo: 53°
Feels Like: 63°
More Weather
Once more pleasant day before we see changes with an increase in heat and humidity, and thunderstorm chances.

One dead in officer-involved shooting in Wolcott