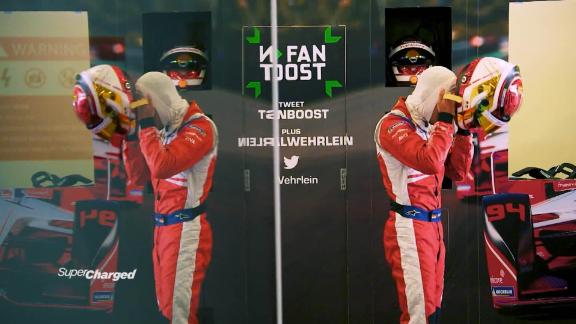 Despite being just three races into his Formula E career, Mahindra's Pascal Wehrlein has never been far from the headlines.

"The mornings start at five or six o'clock," he tells CNN's Supercharged. "It's not my time!

Each of the 13 races on the calendar is a frenetic one-day festival of racing, with the first practice session beginning as early as 07:30am local time and the E-Prix just eight hours later.

With qualifying and media duties to squeeze in too, it makes for a thrilling day at the track unlike any other form of motorsport.

Wehrlein was involved in arguably the most exciting ePrix in the sport's five seasons at the previous race in Mexico City.

The German almost led from start to finish after a scintillating drive in qualifying left him in pole position, but his car's battery died just a few meters from the finish line and allowed Lucas di Grassi to steal victory.

READ: Will Formula 1 follow Formula E and switch to electric power to survive?

Despite the setback, the Formula E rookie remains optimistic about the season ahead.

"We spend a lot of time in the car during the day," enthuses Wehrlein, who is making his debut for the competitive Mahindra team alongside race-winner Jerome D'Ambrosio.

"I really like it [but] we don't have a lot of time in a race weekend -- it's just 30 minutes and 45 minutes practice, so to get used to the track and the set-up is tough.

"But I have a great team behind me which is helping a lot and Jerome has a lot of experience. They're making my life a bit easier!"

In spite of having to master the early mornings, Formula E is providing a new dawn for Wehrlein's motorsport career.

The 24-year-old drifted out of Formula 1 at the end of 2017 after spells at Manor and Sauber where -- despite three points-scoring finishes -- he struggled to show his full potential.

He had arrived with Mercedes backing and was even tipped as the next Lewis Hamilton after becoming the youngest winner of the German Touring Car Championship (DTM) at 20.

But after his six-year relationship with the Silver Arrows ended last December, Wehrlein was left wondering 'what next'?

The answer was Formula E and he was free to join Mahindra in time for round two in Marrakesh.

'I need this environment'

"It's been great," says Wehrlein, despite his Moroccan debut ending with a collision on the first lap.

"They welcomed me straight from the beginning and everyone is so nice.

"After Marrakesh the team was happy because Jerome won the race but everyone came to me and said: 'It was not your fault and we're behind you and next time it's your turn.'

Wehrlein, who has also recently signed as a development driver for Ferrari, has wasted no time paying back Mahindra for their support with sizzling drives in Chile and Mexico.

"It was close," explains Wehrlein. "With two laps to go I started a move but then I had to slow down because of the temperature.

"I felt I could have done more and finished the race in first but I'm happy with second and there should be some room for improvement."

The progress Wehrlein promised soon came in a mesmerizing Mexico E-Prix. The German was on course for a pole-to-flag win until his car agonizingly ran out of energy at the final corner and slowed with the checkered flag in sight.

A five-second penalty for cutting a chicane as he coasted over the line meant Wehrlein was ultimately classified in sixth.

"Aside from the last lap, I'm happy with how the race went and with my first pole position," he said after the race.

Asked how he felt after his first podium in Chile, Wehrlein smiles: "Very good, very good and hungry for more."

This could be Wehrlein's time to shine in Formula E -- even if it means getting up at the crack of dawn.