Facing an aggressive Beijing, Taiwan's president issues a warning to the world 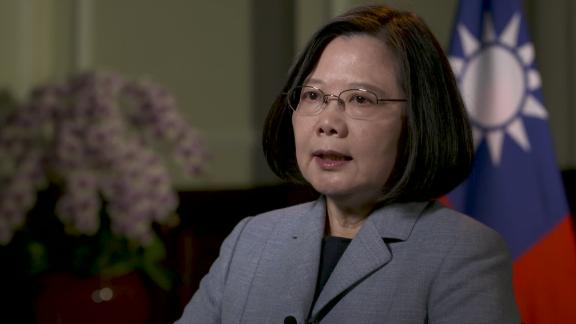 Taiwan President Tsai Ing-wen has sent out a warning to Asia in the face of mounting aggression from Beijing.

In an exclusive interview with CNN, Tsai said the military threat posed by China was growing "every day" in line with a more assertive foreign policy under its President Xi Jinping.

"If it's Taiwan today, people should ask who's next? Any country in the region -- if it no longer wants to submit to the will of China, they would face similar military threats," said Tsai.

Taiwan and China are separated by fewer than 130 kilometers (81 miles) at their closest point.

For seven decades, the two have maintained an uneasy truce following their split at the end of a destructive civil war in 1949.

Unification is a long-term aim for China's ruling Communist Party, which considers self-governed democratic Taiwan -- an island of 23 million people -- to be a renegade province.

But it was the election of Tsai and her historically pro-independence Democratic Progressive Party (DPP) in 2016 which sent relations between the two governments spiraling.

Beijing has placed mounting diplomatic and economic pressure on Taiwan, conducting live-fire drills in nearby seas and flew H-6K bombers and surveillance aircraft around the island.

"With China becoming increasingly strong and ambitious, we are faced with growing threats," Tsai said.

"Our challenge is whether our independent existence, security, prosperity and democracy can be maintained. This is the biggest issue for Taiwan."

Taiwan's unofficial ally the United States has for decades acted as the island's security guarantee against the threat of Chinese military action. But when asked directly, Tsai wouldn't be drawn on whether she believed US President Donald Trump would come to her aid.

Instead the Taiwan leader said she is focused on strengthening Taiwan's own defense capabilities in the face of an "imbalanced war," as China's military modernizes.

"We have to be prepared at all times," she said.

CNN has reached out to the China's Taiwan Affairs Office for comment.

As the first woman to be elected Taiwan's leader, Tsai was carried into office on a swell of anti-Beijing sentiment following attempts by the Kuomintang party to move closer to China.

But her popularity has fallen steadily in the face of domestic opposition to her policies and a struggling Taiwan economy battling to keep up with the mainland.

In November Tsai's DPP suffered a bruising defeat in local elections, losing by as much as 10% across the island. Tsai said the 2018 result was due to what she called a "challenging" domestic reform agenda.

"The people don't feel the result of the reform so much when you've just started," she said.

The setback has not deterred Tsai who revealed to CNN she would stand for re-election in 2020. "It's natural that any sitting president wants to do more for the country."

In January, Xi Jinping called for the "peaceful reunification" of China and Taiwan in a landmark speech, warning that Taiwan independence was a "dead end."

"We make no promise to renounce the use of force," the Chinese leader said.

Tsai said President Xi's January speech had caused concern within Taiwan. She said the island refused to become another Hong Kong or Macau -- both semi-autonomous cities under Beijing's rule.

"(The speech) has alarmed us that Taiwan's independent existence may be changed," she said.

But Tsai said the threats and intimidation out of Beijing are counter-productive to Xi's goals, and serve only to push the island further away from the Communist Party and strengthen support for democracy.

"China may feel such (pressure) would create a sense of failure for people in Taiwan and deal a blow on our morale. But every such move has only further upset and alienated Taiwanese people," she said.

"China's behavior has only backfired in Taiwan."

In January Taiwan held military drills intended to ready its troops in the event of an invasion from the mainland. Photos showed dramatic images of helicopters and artillery launchers conducting live-fire exercises.

Tsai said she was strengthening Taiwan's military capabilities in the face of China's rapid modernization. She said Taiwan was "on alert 24/7" for the first sign of a Chinese strike.

"What we are expecting is, after withstanding the first wave of Chinese attacks ourselves, the rest of the world would stand up to exert strong pressure on China," she said.

While Tsai did not say it specifically, it's likely any pressure exerted on China will come from Washington. For years, the United States has provided a tacit guarantee of protection from Beijing.

Under Trump, the relationship between Washington and Taipei has grown closer with expanded weapons sales and greater vocal support from US politicians.

In 2018 Trump signed into law the Taiwan Travel Act, encouraging "visits between officials of the United States and Taiwan at all levels." Months later, the US approved the sale of submarine parts to Taiwan.

In June, the US opened a new, $255 million de facto embassy on the island, known as the American Institute in Taiwan.

Many leaders around the world have criticized President Trump for focusing on domestic US interests at the expense of the international community but Tsai said she didn't see it that way.

"Any president has to take multiple factors into consideration when making decisions, especially domestic decisions. That's why President Trump has been emphasizing 'America First'," she said.

Trump broke decades of protocol and took a brief congratulatory call from Tsai upon his election in 2016, but the two have yet to meet in person.

There is an outside chance that could change this year. A group of US lawmakers, led by well-known China hardliner Marco Rubio, have asked US House Speaker Nancy Pelosi to invite Tsai to address a joint meeting of the US Congress.

But Tsai declined to say whether she would accept an invitation to speak, a move that should it go ahead would be sure to infuriate China.

"It's not a simple question of invitation and acceptance," said Tsai. "Whether or not to go deliver a speech in Washington would depend on whether such a move benefits Taiwan, our relations with the US and regional stability."

The US has been careful, at least publicly, to adhere to a so-called "one China" policy, acknowledging Beijing's assertion that Taiwan is part of China, as well as the People's Republic's status as the sole legitimate government of China. It is this policy that sees the US base its embassy in Beijing, but not in Taipei.

But Washington has also maintained deliberate ambiguity on the status of Taiwan, only encouraging both sides to engage in dialogue to settle their long-running disputes.

Caught in the middle

Trump's foreign policy hasn't all been good news for Taiwan. As the US President tries to drive down the trade deficit, Taiwan has become caught in the middle of a US-China trade war.

"There's a lot of trade and economic flow between Taiwan and the US as well as investment and trade with China," said Tsai. "We have to make sure that we can lessen the impact of any kind of uncertainty on Taiwan's economy."

Tsai said with no clear end to the trade dispute in sight, she was taking actions to protect Taiwan, including government spending to stimulate domestic consumption and investment.

"So that the growth of our economy can be driven by domestic demand instead of an over reliance on exports," said Tsai.

But while the trade war may cause difficulties for Taiwan's exports, it could present an opportunity for the island's tech sector.

The US is currently ramping up its opposition to Chinese technology, in particular the telecoms giant Huawei, over concerns of potential security threats.

Both US Vice President Mike Pence and Secretary of State Mike Pompeo have warned countries that using Chinese 5G mobile phone technology will make it more difficult to work with the US.

Tsai said that unlike Chinese products, other countries had no such security concerns about Taiwan's technology. "Taiwan is a very secure location for the manufacture of such products," she said.

"We manufacture and design a lot of high-tech products such as semiconductors and we rank in the front in terms of worldwide production."

Throughout her interview, Tsai painted the picture of Taiwan as an underdog facing down the growing might of Beijing, the first line of defense for the liberal, democratic world order.

"If a vibrant democracy that champions universal values and follows international rules were destroyed by China, it would be a huge setback for global democracy," she said.

Set against that backdrop, military tensions between Taiwan, China and the US have continued to rise.

On January 2019, Washington sent two guided missile destroyers, the USS McCampbell and USNS Walter S. Diehl, through the Taiwan Strait in a message of defiance to Beijing.

In reply, the Taiwan military posted dramatic footage of soldiers, tanks and explosions, followed by a simple message -- "On standby 24/7."

Tsai said China wants to become a "global hegemony" and if Xi's attention turns to expansion outside of the country's borders, Taiwan would be "first to be hit."

"I believe this is not just an issue of Taiwan under attack, but a reflection of China's willingness to use force for its expansionist policy," she said.

"It's not just Taiwan's interests at stake, it's the whole region's or even the whole world's."