How Liam Neeson's shame could do some good 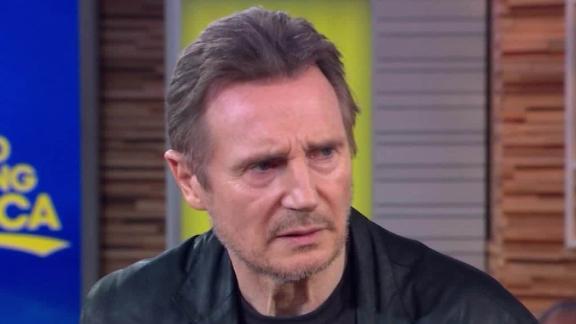 Liam Neeson appeared on "Good Morning America" on Tuesday in the wake of controversy over his saying he contemplated carrying out a racist revenge attack after someone close to him was raped.

Hollywood action star Liam Neeson's candid admission during an interview with The Independent that he once spent a week looking for a random black man he might assault or possibly "kill" after the alleged rape of a female friend by "a black person" has gone viral, pushing Monday's headlines further from the aftermath of the Super Bowl and toward racial controversy.

Social media pundits and others have condemned Neeson's confession as an example of the worst kind of racism and hatred against black men. After finding out his friend had been assaulted, Neeson set out on a search and destroy mission for any black man he could find. This admission is troubling for myriad reasons, but especially Neeson's generalized profiling and targeting of black men for potential violence who had nothing to do with the alleged crime.

Parts of the 66-year-old actor's confession will make readers wince, but others display ample courage in speaking out about racial fears and anxieties that plague global society. With brutal candor, Neeson told a story of (at least how he sees it) of personal redemption. The actor detailed his personal shame in recalling the story of how -- filled with anger, rage and a need for revenge — he went on a futile manhunt "hoping some 'black bastard'" would randomly try to assault him.

For anyone familiar with the history of lynching, racial injustice and contemporary racial profiling in the United States, this interview makes for deeply painful reading, particularly at the outset of Black History Month, a time for reflection on and commemoration of the struggle for racial justice in America and, indeed, around the world.

But Neeson's fortitude in sharing this story should not be dismissed. In an era of what Robin DiAngelo and others have called "white fragility" over the thought of engaging in open and honest conversations about race, such candor is a welcome alternative to the longstanding politics of racial denial imbued in American culture. Racial denial, where whites avoid even the casual acknowledgement of the horrors or racial slavery -- let alone the systemic nature of contemporary racism -- suffocates necessary dialogue about racial injustice. Neeson's admission that his thirst for revenge, as a native of Ireland raised in the times of "The Troubles," the often-violent religious division that rocked Northern Ireland before the current peace, compelled him toward hateful behavior illustrates the truly global dimensions of anti-black racism.

Neeson recently gave an interview on "Good Morning America" to clarify his remarks, insisting, "I am not a racist." This may very well be true, but nearly four decades ago when he marched "out deliberately into black areas of the city" looking for revenge, Neeson was certainly being animated by racist impulses. Neeson found absolution, he claims, via a confession to his Catholic priest and through daily power walks that helped him restore his peace of mind. Neeson's efforts to explain himself reveal both great vulnerability and defensiveness that echo a wider, systemic pattern of cultural racism that his candid admission casts a spotlight on.

In speaking his truth in the public eye, Neeson took a great personal risk, one that he is paying for now with considerable damage done to his reputation. The struggle for racial justice requires giving white people grappling with racism the room to confront their own biases and misjudgments in a manner that allows for both growth and, ultimately, redemption.

Such redemption should not be purchased on the cheap, however, and must be earned. Neeson's public admission should be accompanied by not only words but also deeds. From one perspective, Neeson's story reeks of a kind of white male privilege that sprawls from Western European pubs where he lay in wait years ago hoping to stoke racial conflict all the way to the White House in 2019.

The more hopeful view on what might come from this is that Neeson offers us a flesh-and-blood example of a nearly 70-year-old man who remains a work in progress, a man whose world was shaped by Ireland's sectarian political struggles even as he imbibed a cultural racism -- international in scope -- that identified black men (regardless of guilt or innocence) as violent, criminal and dangerous.

The remorse that Neeson admits to in recounting his story is more of an apology than black people have received from America's criminal justice system, whose efficiency in seeking out and indiscriminately punishing black men remains unparalleled.

Hi: 53° Lo: 35°
Feels Like: 34°
More Weather
A sunny and mild day is expected! Changes arrive through the weekend