Louis C.K. joked about the Parkland shooting. A father whose son was killed hit back. 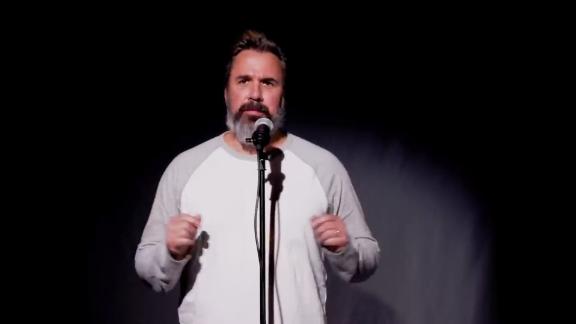 A father whose son was killed in the Parkland shooting in 2018 is taking Louis C.K. to task by recording a standup routine of his own.

When Louis C.K. joked about the survivors of the Parkland shooting late last year, many saw it as a new low for the comedian who was already facing accusations of sexual misconduct and inappropriate behavior.

In audio from one of his sets that leaked in December, the comedian mocked Marjory Stoneman Douglas High School students for testifying before Congress about gun control.

"You're not interesting because you went to a high school where kids got shot," Louis C.K. can be heard saying. "Why does that make you interesting? You didn't get shot. You pushed some fat kid in the way and now I gotta listen to you talking?"

Now a father whose son was killed in the shooting is taking the comedian to task by recording a standup routine of his own.

The "comedy set" is a promotional campaign for Change the Ref, a nonprofit organization started by Manuel Oliver and his wife, Patricia, to help young people fight for gun control.

The sobering video starts out with a shot of Oliver putting up posters to promote his set.

"Murdering Innocent Children Comedy Night," one of the posters reads. "It will be a gun barrel of laughs."

"Shooting near a city near you," reads another line on the poster.

Oliver opens his standup with a reference to Louis C.K., who tried to mitigate the Parkland joke in a later set by joking that it was a distraction from the sexual misconduct allegations against him.

"Recently I heard this great line from a comedian. He said, 'If you want people to forget that you were jerking off, just make a joke about kids getting shot.'" Oliver begins.

"And I thought, jokes about kids getting shot ... I can do that."

He goes on to describe what happened to his son, Joaquin Oliver, who was among the 17 people killed in the shooting in Parkland, Florida, last year.

A drummer punctuates the line by playing the classic comedy riff.

"You guys ever heard dead baby jokes? I got a dead baby. His name was Joaquin Oliver. He was gonna be 18. But now he's dead."

"And that's not a joke," he says before walking off the stage.

The video ends with a call for people to stand up to gun violence.

CNN has contacted Louis C.K.'s representative for comment but has not yet heard back.

When Louis C.K. initially joked about Parkland, the survivors and others were quick to speak out.

"It's a shame when you sink so low that your comeback plan is to make fun of school shooting survivors for speaking out," Stoneman Douglas graduate Ryan Deitsch said on Twitter in December.