Roger Goodell on blown Saints call: 'Our officials are human' 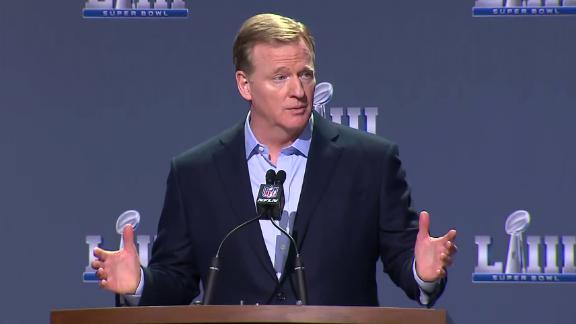 While he admitted publicly that NFL game officials -- as New Orleans Saints fans would spell it -- "bleaux" a major non-call in the NFC championship game, NFL Commissioner Roger Goodell said it was not under consideration by him to overturn the game and have it replayed.

Most of the questions focused during Goodell's session with the media was on a call that was not made in that game against the Los Angeles Rams, who went on to win in overtime and advance to Super Bowl LIII.

Late in the fourth quarter, a Saints-led Drew Brees drive stalled with a controversial no-call from officials on an incomplete pass to Saints wide receiver Tommylee Lewis. The crowd wanted a flag for either pass interference or helmet-to-helmet contact on a defenseless receiver by Rams cornerback Nickell Robey-Coleman. It wasn't thrown.

The focus then became on the NFL rule book, where Rule 17, section 2, article 3 states: "The Commissioner's powers under this Section 2 include the imposition of monetary fines and draft-choice forfeitures, suspension of persons involved in unfair acts, and, if appropriate, the reversal of a game's result or the rescheduling of a game, either from the beginning or from the point at which the extraordinary act occurred. In the event of rescheduling a game, the Commissioner will be guided by the procedures specified in 17-1-5--11, above. In all cases, the Commissioner will conduct a full investigation, including the opportunity for hearings, use of game video, and any other procedure the Commissioner deems appropriate."

Game 'not officiated by robots'

"Whenever officiating is a part of any kind of discussion post-game, it's never a good outcome for us," Goodell continued. "We know that. Our clubs know that. Our officials know that. But we also know our officials are human. We also know that they're officiating a game where they very quickly have to make snap decisions under difficult circumstances. And they're not going to get it right every time. As I said, they're human."

Goodell added that while technology has helped the game, it will not solve all officiating issues.

"The game is not officiated by robots," Goodell said. "It's not going to be."

The other complication, Goodell says, is that this was a no-call.

"Our coaches and clubs have been very resistant," Goodell said. "There has not been support to date about having a replay official or someone in New York throw a flag when there's no flag." He added that this will be discussed with the league's competition committee.

Goodell refused to discuss the personal conversation he had with Payton or Saints owner Gayle Benson, but he said he understood the emotions surrounding what happened.

"It's a play that should be called," Goodell said. "We're going to make sure that we do everything possible to address the issues going forward and see if there are improvements we can make to instant replay."

As to the potential of adding another official to the crews, Goodell expressed his wishes against that.