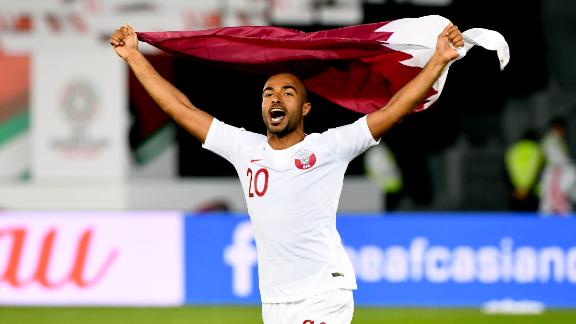 Qatar and the UAE face off in the AFC Asian Cup semifinals in the first match between the nations since their political dispute began.

For all the talk of a "blockade", it was perhaps ironic that Qatar should progress past United Arab Emirates so serenely to reach the final of the Asian Cup for the first time in its history.

While the occasion was ostensibly about football, the build up to the contest -- also dubbed the "blockade derby" -- was surrounded by analysis of the politics and diplomatic strife in the region.

The semifinal clash represented the first time the two had come face to face on the football field since the UAE joined Saudi Arabia, Bahrain and Egypt in breaking off relations with Qatar in June 2017.

Those relations are unlikely to be improved following Qatar's 4-0 victory in Abu Dhabi in a game where home supporters threw sandals and bottles onto the field of play to register their disgust.

While the UAE finished the game with 10 men following the sending off Ismail Ahmed, Qatar's players were left to celebrate ahead of Friday's final against four-time Asian Cup winner Japan.

This contest had already been ramped up as a grudge match owing to the geopolitical crisis before either side had taken to the field.

The boycott of Qatar, the worst diplomatic crisis to hit the Gulf Arab states in decades, followed allegations that the state was supporting terrorism and destabilizing the region.

Qatar rejected the accusations, labeling them "unjustified" and "baseless."

READ: Qatar crisis: What you need to know

Much of the criticism aimed at Qatar comes from its alleged support of the Muslim Brotherhood, an Islamic group considered a terrorist organization by Saudi Arabia and the UAE.

Qatari citizens were given 14 days to leave Saudi Arabia, Bahrain and the UAE, while all three countries banned their own citizens from entering Qatar.

The air and land blockade imposed on Qatar also meant that the national team had to take a longer route to reach the UAE, flying via Kuwait instead.

According to UAE law, sympathizing politically with Qatar is a crime punishable by a jail term of three to 15 years in prison and a fine of no less than AED 500,000 (USD 136,000).

Keen to avoid any potential embarrassment, the hosts had pulled out all the stops to ensure its team had full backing ahead of the clash.

In order to bolster the crowd and further home advantage, the UAE Sports Council bought all unsold tickets, giving them away for free to UAE residents.

The UAE Ministry of Education encouraged students to attend and watch the game, cutting the school day by two hours, while the public sector was given time off to watch the contest and cheer the team on to victory.

But Qatar, the host nation of the 2022 World Cup, appeared undaunted.

Its run to the final of the competition, which included victory over the much-fancied South Korea in the quarterfinal, has been remarkable.

Ranked 93 in the world, Qatar has won all six of its games without conceding a goal and boasts the tournament's top scorer in Almoez Ali.

It was Ali who scored his side's second goal, adding to Boualem Khoukhi's opener as Qatar took control of the contest.

Hasan Al Haydos netted a third with 10 minutes remaining before Qatar took advantage of Ahmed's sending off with Hamid Ismaeil scoring a fourth.

A knitting group is getting through COVID-19 stitch by stitch