Roger Stone must have made Mueller really angry 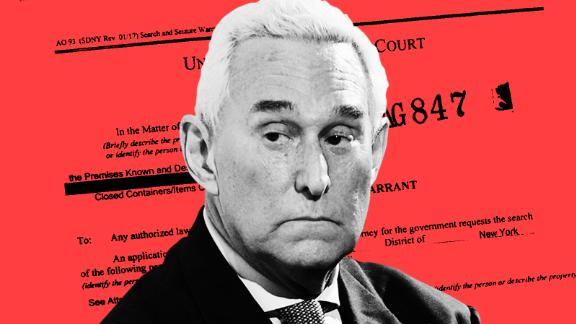 In dramatic predawn raid, FBI agents placed Roger Stone, the Republican king of darkness under arrest at his Florida home on charges related to the Robert Mueller investigation. The televised raid looked like one designed to apprehend a terrorist rather than the pajama-clad 66-year-old Trump campaign advisor renowned for his "dirty tricks" approach to presidential campaigns and the large Richard Nixon tattoo adorning his back. The aggressive raid suggests that it might be time to trade in the Nixon tattoo for a bullseye, especially given the ferocity of the arrest tactics employed by Mueller's FBI agents.

The agents were executing an arrest warrant related to an indictment voted by a Mueller federal grand jury alleging one count of obstructing congressional investigative proceedings (Title 18 USC 1505 and 2), five counts of making false statements (Title 18 1001(a)(2) and 2) and one count of witness tampering (Title 18 USC 1512(b)(1)).

The approach to this arrest makes clear that Roger Stone and possibly his attorneys have done something provocative enough to make the usually low profile and careful special prosecutor extraordinarily angry. Stone was not afforded the customary voluntary surrender option usually seen in white collar criminal cases. Most likely, the raid was intended to send a clear message to other witnesses and potential defendants that witness tampering, a federal felony with a sentence of up to 20 years if it involves physical intimidation, will not be tolerated by the polite but tough former FBI director. The other five counts in the indictment each carry hefty potential sentences of as much as five years each, subjecting Stone to a maximum exposure of 45 years in an ill-fitting federal jumpsuit.

The conduct which likely prompted the use of an FBI arrest team worthy of a Navy SEAL operation can be found in an incredibly stupid and highly incriminating series of messages allegedly sent to the indictment's "Person 2" (reported to be comedian and radio personality Randy Credico) seeking to influence and shape "Person 2's" congressional testimony.

Several pages of the indictment meticulously document Stone's alleged attempt to steer "Person 2's" congressional testimony in language worthy of a Hollywood movie. In fact, Stone actually steals a line from Godfather II to use on "Person 2." Stone refers to a character named "Frank Pentangeli," who -- despite being a Corleone family confederate -- professes innocence before a congressional committee and later kills himself. According to the indictment, Stone allegedly explicitly told "Person 2" to do a "Frank Pentangeli."

In other colorful language, Stone allegedly attempted to influence "Person 2's" testimony via text message, stating: "Stonewall it. Plead the fifth. Anything to save the plan.....Richard Nixon." Later "on or about April 9, 2018," Stone, clearly unhappy with "Person 2's" failure to follow instructions and submit to his Godfather-like threats, writes an email that read: "You are a rat. A stoolie. You backstab your friends-run your mouth my lawyers are dying Rip you to shreds." Stone even threatens to "take that dog away from you" -- presumably a reference to Credico's fluffy white therapy dog, Bianca, who accompanied him during testimony before the federal grand jury. Interestingly, though defense lawyers are not permitted to accompany witnesses who testify before grand juries, apparently Mueller prosecutors have no objection to man's best friend.

In the end, Trump supporters may say the indictment is bad news for Stone but that most of the hard information it contains has been known for a long time -- and none of it proves Russian "collusion" with the president. They may be right, but there's no doubt Mueller is getting closer to the Oval Office; Stone has always been considered a close and continuing confidant of Mr. Trump's. And yet another former Trump confidant, Steve Bannon, is thought to be one of the officials referred to elsewhere in the Stone indictment.

As the Mueller investigation moves closer to its conclusion at least two big questions remain. First, can the use of a presidential pardon save Mr. Trump from the wrath of Roger Stone (if Stone turns on him) and other potentially adverse witnesses? Stone's lawyer told CNN that Stone's misstatements resulted from forgetfulness and were "immaterial," and that Stone did not receive materials from WikiLeaks prior to their public release. Second, is former US Navy lieutenant Steve Bannon, the man who said the Trump Tower meeting was "treasonous," a friend or foe for former Marine second lieutenant Robert Mueller, the recipient of the Bronze Star with Valor, two Navy Commendation Medals, The Purple Heart, and the Vietnamese Cross of Gallantry?

If Stone and Bannon turn into the 2019 version of Fredo Corleone, the president will face a tough road ahead.

Wabash Township Firefighter: 'With my termination being seemingly inevitable, I am coming forth now'