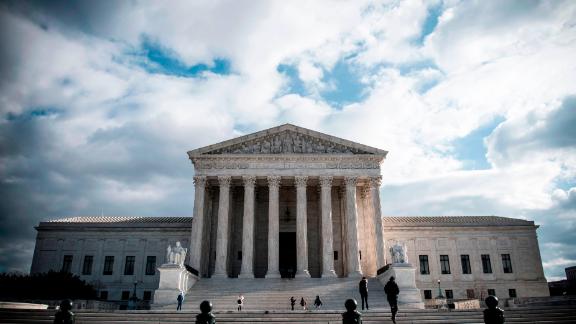 The new conservative majority on the Supreme Court delivered a mixed verdict to the president on a trio of issues critical to the Trump administration.

Thanks to the increasingly conservative Supreme Court, a number of brave, capable and patriotic Americans are about to be banned from the military -- not for any reason relating to their qualifications or ability to defend the country in combat, but solely because of who they are.

On Tuesday, the Supreme Court issued an order temporarily allowing Donald Trump's illogical and vindictive ban on transgender people serving in the military to go into effect while the lower courts work through the case. The Supreme Court could just have easily maintained the status quo -- which allows transgender people to serve -- while the case wended its way up the chain. Instead, the five conservative members of the court sent a strong message: Reactionary and discriminatory policies will see new life under this court.

Trump's transgender ban, which he announced via Twitter in July 2017 with apparently very little thought or planning, is premised on the idea that transgender people are expensive and distracting: "Our military must be focused on decisive and overwhelming victory and cannot be burdened with the tremendous medical costs and disruption that transgender in the military would entail," Trump tweeted.

As of 2016, there were nearly 9,000 transgender people serving in the military. While it's tough to calculate exactly how much it would cost to pay for gender confirmation surgery and other procedures and medications trans service members need, estimates generally show that the costs would be extremely low -- about one-thousandth of one percent of the Defense Department's budget, according to a 2016 Rand Corp. study commissioned by the Defense Department. The military spends 10 times as much treating erectile dysfunction, and five times as much on Viagra, according to an analysis by the Military Times.

In other words, this isn't about money.

Another data point: The Trump administration has attempted to define gender as immutable and determined "on a biological basis that is clear, grounded in science, objective and administrable." By that calculus, transgender people aren't just banned from the military -- they are wiped out of existence.

And another: Education Secretary Betsy DeVos revoked Obama-era guidelines that attempted to make life marginally better for transgender kids by telling schools to recognize kids' gender identity and let them use the bathroom consistent with their gender. Plenty of Americans are uncomfortable with the idea that one might not identify with the gender they were assigned at birth, but it takes a special kind of cruel to say that trans kids, who are already too often the subjects of bullying and abuse, shouldn't even be able to pee in peace.

It also takes a special kind of hubris to deny qualified, devoted servicemembers the opportunity to serve and to still call yourself a representative of American greatness and military power

I'm far from a nationalistic pro-military cheerleader, but as long as the institution exists, it should be fair and should pull from the best pool of candidates -- not make arbitrary exclusions because some social conservatives don't like trans people.

The courts are supposed to be bulwarks against this kind of overreach. One problem with democracy is the propensity of the majority to scapegoat and discriminate against the minority, which is part of the reason the judicial branch exists -- to make sure rights are enjoyed equally.

The current conservative court, including newly appointed Brett Kavanaugh, clearly does not see itself that way. Rather, the right-wing justices are making it clear that they are happy to be judicial activists when it serves their ideological preferences.

That does not bode well for the future of transgender rights, gay rights, women's rights and civil rights. Moneyed and nefarious organizations have been working hard to dismantle even the limited social progress our society has made toward equality, and transgender people are a primary target.

Blowing up our gender norms also threatens to undermine long-entrenched male power structures, which is a real threat to those who benefit from them.

Including the right-wing men on the Supreme Court. As many of us work to smother out discrimination and inequality, many others are working to breathe new life into a system of unearned and undisputed male power. This order is just the beginning.