What Vogue did to Noor Tagouri tells a bigger story 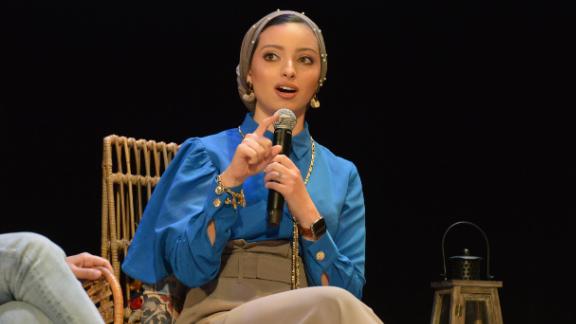 Vogue magazine is apologizing after misidentifying Muslim-American journalist Noor Tagouri as Noor Bukhari, who is an actress from Pakistan.

"Oh my God, I'm freaking out!" screamed Noor Tagouri in an Instagram video as she opened up the latest issue of Vogue. The magazine featured Tagouri in a full-page color photograph and the journalist was eager to see herself in print. Within moments, however, Tagouri was freaking out for another reason. The photograph was there, but it misidentified her as "Noor Bukhari" -- a Pakistani actress who also wears the headscarf.

Vogue has apologized to Tagouri since then, but the typo in the print issue of the magazine, already on newsstands, will, of course, remain. In that enduring misidentification, which is not even Tagouri's first (the last time she was mistaken in another publication for Noor Salman, the wife of Pulse nightclub shooter Omar Mateen), lurks a horrible truth of how America chooses to treat Muslim women who wear the headscarf: To many Americans, one veiled Muslim woman is interchangeable for the next.

In the skin-deep tolerance of contemporary American visual culture, the headscarf-clad woman is the ultimate stock image, devoid of specificity and individuality and yet saddled with all the preconceived ideas the onlooker has ever had about Muslims. If encountered in real life, she can be stared at or harassed, or cornered into answering question after question about her faith and herself, or asked to provide validation for both. If encountered on the page of a fashion magazine, she can be flipped past, her presence understood as the perfunctory salute to the surface commitment to diversity that fashion magazines sometimes flash at their readers.

There is no justification for such misidentification. Scientific studies have proven that there is no physiological basis for it; the ability of study participants to correctly identify women is not diminished when the women are wearing headscarves. The reason then is likely sociological; whether done out of animus or carelessness, misidentifying those who already face alarming levels of harassment in the United States is likely assessed to be free of social cost or moral censure.

Then there are the distorted orientalist associations of the veil itself; specifically the assumption that Muslim women wearing it lack agency, and hence permission need not be bothered with anyway. As a publication, Vogue is not new to playing around with the veil and its exoticized associations; in late 2006, the publication included veiled women in a stylized photo shoot by renowned photographer Irving Penn. In that shoot, which used models, every one was correctly identified. Clearly the problem lies not with the veil making correct identification difficult or arduous, but in the premise that the veil is permissible as a prop and not as an actual choice.

The why-bother-who-cares attitude toward Muslim women who wear headscarves was also visible in a recent case in which a Muslim woman named Fifi Youssef sued Associated Press photographer Mark Lennihan for using her likeness for the purpose of trade, after he took a picture of her at a Starbucks and put it up for sale on the AP website. Youssef, who wears a headscarf, became aware that her photo had been purchased by the Washington Post and was being used as a stock photo to illustrate an article that argued against the headscarf.

In recent history, the United States has waged war in Afghanistan built partly on the pretext of freeing Afghan women from the veil. Unveiling in American culture has been elevated to a heroic act of rescue accomplished with bombs or Oprah performing a section of "The Vagina Monologues" in which she lifts the veil off the heads of nameless women. Finally, the photograph of the famous 1985 "Afghan Girl," which remains one of National Geographic Magazine's most iconic covers, also failed to mention the subject's name -- only getting to it decades later.

The war in Afghanistan may be drawing to a close, but no substantive efforts are underway to undo the legacy of cultural derision that remains. This is the true context for the dressing down and dismissal of Muslim women such as Noor Taghouri by explaining away the mistakes of those who commit them as one-offs, rather than part of a wider cultural pattern of condescension.